SHAME is a movie that is so brutally honest and achingly sympathetic about sex and love addiction that I can't help but believe that someone in the production is or knows someone with the disease, as I do.  It leaves you profoundly thankful that someone had the balls to go where few mainstream film-makers would dare to go, and had the wit, style and empathy to depict highly sexually explicit material without one iota of leeriness or mockery.

The movie centres on a brother and sister called Brandon and Sissy (Michael Fassbender and Carey Mulligan).  They have clearly suffered some kind of childhood trauma that has resulted in deeply disturbed attitudes toward sex and love, as well as behaviours of literal self-harm and suicide on the part of Sissy.  Brandon has created a successful, almost pathologically clean life in New York, but secretly feeds his compulsion for sex with whores, cyber-sex, one-night stands and compulsive masturbation. He takes no joy in these activities but is maintaining his dual existence comfortably until Sissy arrives.  She is less a sex than love addict, craving the attention of her brother - a relationship that hints at a dangerously unboundaried sexual tension - then his boss - she uses sex to get what she really wants, which is an approximation of a genuine emotional closeness - and self-harms when she can't get it.

Sissy's arrival and exposure of Brandon's double life leads to a moment of deep shame and purging, and an attempt to have a normal sexual relationship with an office worker. It's a relationship we know is doomed given Brandon's condition - and which precipitates a backlash that culminates in a scene of profoundly explicit sex that is also perhaps the most moving and despairing piece of acting I've seen in quite some time.  Particular credit to DP Sean Bobbitt and director Steve McQueen for capturing Michael Fassbender simulating orgasm in a manner that looks completely desperate, horrific, horrified and pained. One could almost have ended the movie on that scene and perfectly captured the tragedy at its heart. 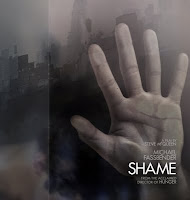 It should be clear by now that I am full of admiration for this bold, brave, painful movie.  Fassbender once again displays his complete courage and Steve McQueen his ability to use visuals and silence to create scenes of quiet power. But perhaps the biggest revelation was Carey Mulligan, who takes on an extremely challenging role - exposing herself physically and emotionally - and is utterly convincing.  Admittedly, SHAME is in some respects less pure than HUNGER, given that it plays with a wider cast of characters and a less austere colour palette.  But what it looses in purity and visceral power it makes up in its deep humanity.

SHAME played Toronto, Venice and London 2011. It goes on release in the US on December 2nd; in the  UK on January 13th; in Germany on March 1st and in the Netherlands on March 15th 2012.


For those wishing to seek more information about recovery from sex addiction please use the following link: http://saa-recovery.org.uk/materials/79-leaflets.html. It gives useful information and advice to anyone wanting to learn more, as well as for health professionals.
Posted by Bina007 at 14:00