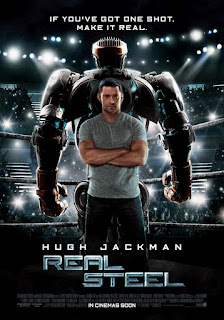 REAL STEEL is set in the near-future where robot fighters have taken over from humans.  Hugh Jackman plays a washed up ex-boxer called Charlie, who's so deeply indebted and uninterested in his son Max (Dakota Goyo), that he effectively sells his right to parent to his rich sister-in-law (Hope Davis).  Paid to babysit the kid for a summer, Charlie surprisingly finds himself bonding with the kid who shares love of robots, as well as enough charisma and chutzpah to get their underdog bot a prize fight.  Newly inspired, Charlie teaches the bot to shadow box, setting the film up for a Rocky-like final bout and a schmaltzy finale in which father and son and bot have bonded with each other and the crowd.

I fully expected to hate REAL STEEL but rather enjoyed it.  It's an entirely derivative affair, to be sure, heavily borrowing from ROCKY.  And after the first twenty minutes you can predict everything that's going to happen in the film.  But for all that, there's an unmistakable chemistry between the lead actors, some wonderfully designed fighting robots, and some handsomely choreographed fight scenes - apparently courtesy of Sugar Ray Leonard.  The upshot is that while I knew exactly how the movie would play out, I was genuinely excited and moved by the final fight scene and the shamelessly populist ending.

Digging into the credits, it's easy to see why the movie works.  The Sugar Ray Leonard credit combined with cinematography from Mauro Fiore (AVATAR) and direction from Shawn Levy (NIGHT AT THE MUSEUM) adds up to technically impressive and visually engaging vis effects.  And the original idea, based on a story by Robert Mathieson (I AM LEGEND) holds our interest.  Overall, REAL STEEL is a perfectly fine kids movie with enough fighting skills to hold an adult's interest.  I can't quite understand the rather sniffy reviews.

REAL STEEL was released in autumn 2011 and is now available to rent and own. It was nominated for an Oscar for Best Achievement in Visual Effects but lost to HUGO.