Overlooked DVD of the month - A ROYAL AFFAIR 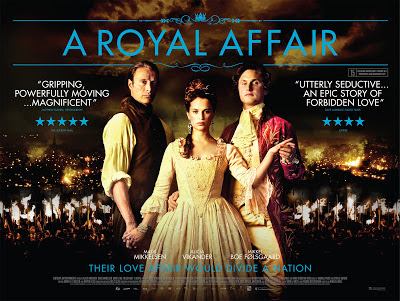 Nikolaj Arcel's Danish costume drama may have been overlooked upon release by this blog, but it has quietly won praise at Berlin and now finds itself a contender for the Best Foreign Language Film at next year's Oscars.  This obliged me to check it out, and I have to say, I was struggling to understand what the fuss is about.

The movie plays as a conventional, earnest, rather plodding historical drama, based on a true story, set in the 18th century Danish court.  Pretty but naive English princess Caroline Mathilde (Alicia Vikander) is married to the Danish King Christian VII (Mikkel Boe Folsgaard), a socially awkward, mentally unstable but well-meaning young man.  She dutifully gives him an heir, but falls for the Court Doctor, Streunsee (Mads Mikkelsen), a radical Enlightenment thinker. This gives us the "forbidden love" material so beloved of publicists, and of course once an illegitimate child is born and the established aristos become jealous of Streunsee's power, it doesn't end well for the lovers. But by far the more interesting story is that of the King's unhealthy friendship with Streunsee, and Streunsee's rather ambiguous personality.  Far  from a wholly good hero, liberating our heroine, and Denmark, with enlightenment thinking, Streunsee is a deeply imperfect man.  He reinstalls laws of censorship as soon as the libeliste attack his relationship with the Queen, and shamelessly manipulates the King.

The weakness of this film is that Vikander and Mikkelsen have zero screen chemistry. Their romance is incredible (literally - I didn't believe it) - if anything a romance of the mind rather than the heart.  And this banal transgressive love story sucks up time that could have been given to court intrigue.  As for Mikkel Boe Folsgaard's performance, it's certainly the best of the three, but has none of the deep sadness or brilliance of, say, THE MADNESS OF KING GEORGE III.

Indeed, this film suffers in general by comparison with other costume dramas set in the same period. In particular, the similarity of the young foreign princess married to a difficult man - the illicit love affair - the libelists - the palace intrigue, casts this film in an unfavourable light relative to Sofia Coppola's radical MARIE ANTOINETTE. That movie broke the mould, and since then, a conventional, if polished historical romantic drama, just seems rather anaemic.

A ROYAL AFFAIR played Berlin 2012 where Mikkel Boe Folsgaard won the Silver Bear for Best Actor, and Nikolaj Arcel and Rasmus Heisterberg won the Silver Bear for Best Screenplay.  The movie also played Toronto and Telluride. It is Denmark's official submission for the Oscars.  It opened earlier this year in Denmark, Estonia, Sweden, Germany, Ireland, the UK, Australia, New Zealand, Turkey, the Netherlands, Iceland, Israel, Norway, Belgium, Poland and Spain.  It is currently on release in Spain and the USA, and opens this weekend in France and Hungary. It opens on December 10th in Slovenia and in Argentina on April 4th.
Posted by Bina007 at 22:40