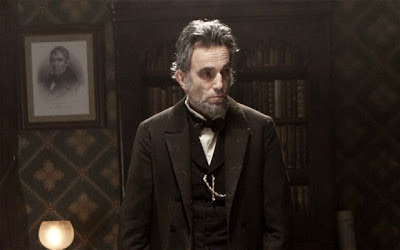 Steven Spielberg's LINCOLN is a masterpiece, and certainly his best film since JURASSIC PARK, and his only good film that attempts profundity and nuance rather than spectacle.  For that we have to thank a screenplay by Tony winning playwright Tony Kushner ("Angels in America") that never dumbs down the nuanced political considerations of the time; never shies away from tarnishing "Honest Abe" with the reality of political vote-getting; and deftly juggles a vast array of characters  It's a screenplay that understands the deep historical import of its material, but finds time to turn an icon into a real man, not to mention allowing for comic relief. Of course, for that transformation we also have to thank Daniel Day-Lewis, who turns in the kind of tour-de-force charismatic, many-layered performance that we have come to almost take for granted. With a little make-up, a careful study of gait and a beautifully pitched voiced, Day-Lewis clothes himself in crumpled world-weariness and a fondness for the laconic anecdote that hides an inner steel and practicality.  His Lincoln gives politicians of all colours a stern lesson is not letting pride and one's vainglorious boasting about one's moral compass blind one to the necessity of real politics - that is, working with the opposition, working the system, lobbying hard and using patronage where necessary - to get the bill passed.

In this case, the bill is the 13th amendment to the US constitution, forbidding slavery in the US and and all lands subject to its laws.  The film shows that Lincoln cares enough about this great work in its own right but also because he sees the potential legal problems with his Emancipation Proclamation. In public he argues that the bill, by crippling the Southern economy, will hasten the end of the war. But the reality is that the war is already near over, and the South willing to negotiate a peace. The key drama of the film is that Lincoln must put off that peace, as much as he desires it, because he knows that as soon as it is negotiated, he will loose support for his Bill from sections of his own party. Second, he must secure crucial swing votes from the opposition, by means fair and foul.

LINCOLN is, then, a film about politics and the raw, unpleasant reality of doing a deal. There is very little battlefield action, although the horrors of war are never far from his, or our mind.  We see the cost of delaying the Southern delegation of peacemakers (led by Jackie Earle Haley) and the lawyer's equivocation that ultimately gets the bill passed. We also see Lincoln's secretary of state, Seward (David Strathairn) hire three lobbyists cum vote buyers played by John Hawkes, Tim Blake Nelson and most memorably, a rotund and roguish James Spader.  Spader's down and dirty politics is surpassed only for style by Tommy Lee Jones Republican leader and abolitionist Thaddeus Jones.  He is portrayed as a kind of 19th century Malcolm Tucker, full of colourful insults and sneering bullying of callow young politicians. He provides both light relief and real insight into the art of political compromise, and deserves an Oscar nomination as much as Day-Lewis.

Politics aside, the movie shows us Lincoln as a man who connects with people - who is truly beloved and respected - with his personal touch and colourful stories.  It also shows us Lincoln as the doting father, and frustrated but loving husband.  Sally Field as the grieving, angry, stubborn Mary Todd Lincoln gives a stunning and screen-stealing performance - again Award-worthy.  It is fortuitous for Spielberg that his consistent and typically ill-cast obsession with father-son relationships actually works in LINCOLN.  Our grief at his assassination is not just because a great man has been killed, but because a good father has died. Which brings me to the only weakness of the film.  The movie has a natural and elegant final scene about five minutes before it actually ends, with Lincoln walking away from us and into history.  To my mind, we didn't need to actually see the assassination at all.

LINCOLN is on release in the USA, Canada and Chile. It opens on January 18th in Lebanon, Mexico and Spain; on January 24th in Belgium, the Czech Republic, Greece, Italy, Russia, Slovenia; on January 25th in Austria, Brazil, Bulgaria, Colombia, Ecuador, Estonia, Finland, Ireland, Lithuania, Sweden, and the UK; on January 31st in France, Denmark, Hungary, the Netherlands, New Zealand, Peru, Portugal, Guatemala, Iceland, Norway, Panama and South Africa; on February 7th in Argentina, Australia, Bolivia, Costa Rica, El Salvador, Honduras,  Nicaragua, Turkey and Uruguay; on February 14th in the Dominican Republic; on February 21st in Hong Kong and Singapore; on April 5th in Venezuela; and on April 19th in Japan.
Posted by Bina007 at 10:01