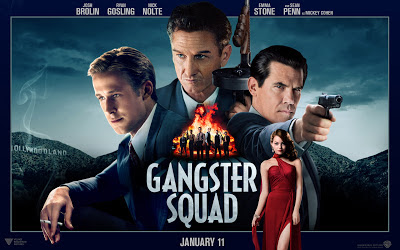 GANGSTER SQUAD is a movie that's all style and no substance. The post WW2, Los Angeles crime thriller has beautiful people (Emma Stone, Ryan Gosling, Josh Brolin) in beautiful costumes, trying to say cool things while in mortal danger.  But where Curtis Hanson/James Elroy's, LA CONFIDENTIAL,  was slippery and seductive and genuinely scary at times. Ruben Fleisher's GANGSTER SQUAD is about as cartoonish and risible as Warren Beatty's DICK TRACY.  Nowhere is that more obvious that in the hero and antihero.  Josh Brolin's fearless cop O'Mara is an earnest meat-head. Every decision he takes in hunting down Sean Penn's real-life gangster Mickey Cohen is plain dumb.  O'Mara blunders through this movie, all muscle and no irony, and we're left wondering why his marvellously clever wife (The Killing's Mireille Enos - the only heart-warming performance in the film) sticks with him.  As for Sean Penn as O'Mara's nemesis, this is his worst performance in some time, not helped by the fact that he's under so much make-up he looks like a parody on Mickey Rourke.
The plot, such as it is, sees the one clean senior cop bring together an off-the-books gangster squad of policeman, led by O'Mara, to kick Cohen's ass out of town. It's a band of misfits and clichés - a sharpshooter - a token African American, a token Latin American - a brain (Giovanni Ribisi, whose characteristic over-acting does not look out of place here) - and the Face man (Ryan Gosling).  Naturally the Face man falls for the gangster's moll (Emma Stone) leading to a hackneyed side-plot, but in a movie painted with this broad a brush are we really surprised that all basically ends well in the best of all worlds?
GANGSTER SQUAD was a great disappointment. I'd imagined great things from Ruben Fleisher after his genuinely witty and original ZOMBIELAND.  I partly blame Will Beall's plodding script full of mono-dimensional characters. But at the end of the day, it's the director who directs bland performances, decided to use anachronistic, cheap, Zack Snyder-y, vis effects, and generally drags down the tone of the production.
GANGSTER SQUAD is on release in Belgium, Australia, Chile, Ireland, the Netherlands, Singapore, the UK, Canada, Estonia, India, Lithuania, Norway, Romania, Sweden, Taiwan and the USA. It opens on January 17th in Argentina, Denmark, Hong Kong and New Zealand; on January 24th in Germany, Greece, Kuwait, Russia and Iceland; on January 31st in Hungary, Slovenia, Brazil, Bulgaria and Turkey; on February  7th in France, Portugal and Spain; on February 21st in Italy; on March 1st in Finland and on May 3rd in Japan.
GANGSTER SQUAD is rated R in the USA, and has a running time of 113 minutes.
Posted by Bina007 at 21:51