THE HOBBIT: THE DESOLATION OF SMAUG - he's not even the centre of his own poster, goddamit! 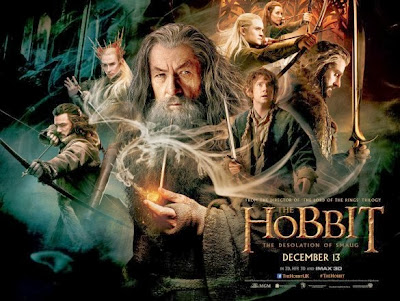 So, I'm a great fan of Tolkien, going so far as to podcast in great detail on Lord of the Rings (links here) and despite the changes, I really loved Peter Jackson's movies.  By contrast, I found the first HOBBIT film dull and tonally uneven - never quite knowing whether it wanted to be the whimsical children's book or an altogether darker, more complex prequel to LOTR, using material from the Silmarillion and Appendices.  The result was a movie that alternated between troll-ish buffoonery and deep dark elvish foreboding, and never quite sat right with me. So I went into its sequel, the middle film of the trilogy, with low expectations.

But maybe I'm getting ahead of myself? And I'm sure there are lots of people who will watch these films without having read the book - and, indeed, if you didn't see the first HOBBIT film, Jackson has provided a handy little catch-up prologue at the start of this one.

Bilbo Baggins is a small hobbit living in a high fantasy world of trolls, elves, dwarves and dragons.  He's taken along on an adventure by thirteen dwarves, led by the mighty Thorin Oakenshield, to find a dragon called Smaug and to trick him into giving up the Arkenstone - a jewel which will allow Thorin to reclaim the kingdom that Smaug pillaged.  When we meet the band of travellers in this instalment, they run into a giant wolf-warg called Beorn, as well as some giant spiders, before finding themselves imprisoned by the elf-king Thranduil, his son Legolas, and a comely female Elf called Tauriel. They escape though, and find themselves in a desolate Laketown, hiding with a smuggler called Bard, before entering the Lonely Mountain itself, to face off with the dragon, Smaug.

As movies go, this one has its fare share of CGI heavy adventure sequences - some of which will surely delight children.  But I found it hard to care about any of the characters. If the hero is Bilbo, as the title suggests, why does he sort of disappear from view for the middle section of the film? (I mean, he doesn't even get centre stage in his own poster!) Are we meant to care about Thorin - he's heroic but also arrogant and cold.  And what are we meant to make of Tauriel, a newly invented character meant to redress Tolkien's lack of women?  Well, maybe I'd be able to take this more seriously if the writers had made her a genuinely independent kick-ass warrior, rather than foisting her into the middle of an awkward love triangle between Legolas and Kili, a dwarf! And are the actors meant to be playing it straight - angst-ridden men on the verge of war (Thorin, Bard) - or camping it up (Thranduil, the Master of Laketown)? Lee Pace's Thranduil is camper than Alan Cumming as Emcee.  And if the pacing is less stretched than the first film, there are still twenty minute sections of this one that left me bored.

That said, when this second movie works, it really works!  I loved everything to do with Martin Freeman's Hobbit and Benedict Cumberbatch's Smaug, even if Smaug does commit that fatal Bond villain error of not killing his enemy immediately. I loved Evangeline Lilly's Tauriel when she was arguing with Lee Pace's Thranduil about taking a less insular stance toward the evil in the forest.  And I loved the idea of building out Bard's character so that we actually care about him when we get to the fateful events of the next instalment.

Still, I can't help but think that this flick would've been better of as two films at most, or at best, as a miniseries.  Or perhaps it's a question of expectations? Instead of calling these films "The Hobbit" maybe Jackson should've called them genuine prequels to Lord of the Rings. That way, he wouldn't have been hamstrung by the more childish elements - tricking trolls and escaping in wine barrels - and could've steeped himself in the rise of Sauron to his heart's delight?

THE HOBBIT: THE DESOLATION OF SMAUG has a running time of 161 minutes and is rated PG-13 in the USA and 12A in the UK for moderate violence and threat.