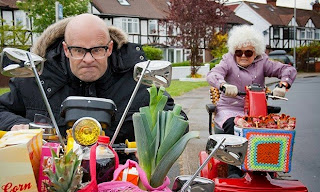 Harry Hill is a British comedy institution - with his big glasses, tall white collars, and surreal, puppet-laden, humour.  His new movie makes no compromises - it contains all the absurdity, outlandishness and brilliance of his TV movie except stretched out over 90 minutes and with lots of movie spoofs as a nod to the big screen.  I think you'll know if you love this film from the opening credits, where Harry and his nan, played by Julie Walters, have a pant-wettingly funny mobility scooter chase through suburban streets.  This is rapidly followed by a a World War Two era gunfight between Harry and his chickens.

We're then into Plot.  Harry's pet hamster Abu is gravely ill, as diagnosed by a vet played by THE INBETWEENERS' Simon Bird. So Harry and his Nan decide to take him to Blackpool for a final holiday.  Cue the inevitable comedy song and dance routine and you remember just why Julie Walters is a comedy genius. Meanwhile, we've been told by Nan that Harry actually has a long-adopted secret evil twin called Otto, played by Matt Lucas who has hired the evil vet to capture Abu. And as a sub-plot, Harry is trying to persuade his Nan to go into a retirement home.

I was just about losing patience for the silliness - which really does work better in the small doses of a TV sketch show - when Sheridan Smith appeared with Harry to perform an under-sea dance routine, but even after that I was getting a little restless.  All of which is to say that even confirmed fans are probably better of watching this film in smaller chunks over successive nights on DVD.

THE HARRY HILL MOVIE has a running time of 88 minutes and is rated PG for mild comic violence and threat, sex references and innuendo.
Posted by Bina007 at 12:17