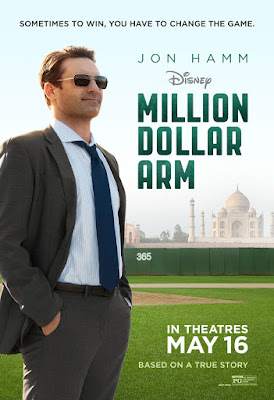 MILLION DOLLAR ARM has a running time of 124 minutes and is rated PG.  The movie was released earlier this year in India, Canada, the USA, Cambodia, Pakistan, Argentina, Greece, Chile, Turkey, Mexico and Peru.  It opens this weekend in the UK and Ireland.  It opens in September in Italy, Panama, Colombia, Germany, Denmark, South Africa and Brazil. It opens in October in Japan, Spain and Norway, in Hungary on December 1st and in Sweden on March 11th 2015.
Posted by Bina007 at 17:26