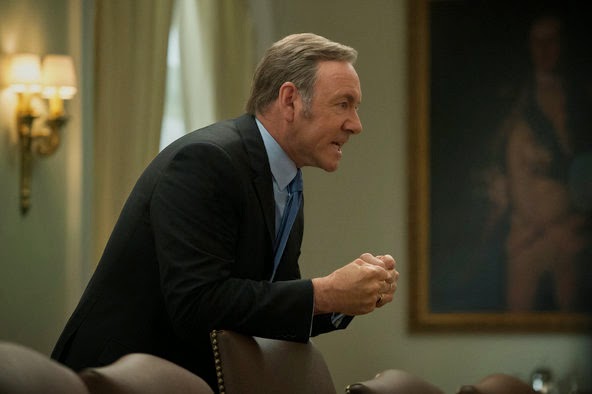 COMMENTS: Well, Tom Yates suddenly became an interesting character!  Trying to manipulate an arch manipulator is really quite something and I wonder if he's even really bisexual and whether all those tales of turning tricks are actually true.  It's a measure of how wrong-footed Frank has been in this episode that he doesn't go for it - after all, in previous seasons he has taken what he wanted with absolute certainty he won't be found out.  In other news, Claire has been comprehensively belittled by Frank who tells her she's been played.  There HAS to be some comeback for that doesn't there?  Isn't the endgame that Claire stiffs Frank and runs in her out right? If not this season, then next season.  The obsequious willingness to even change her hair colour because of a focus group seems uncharacteristic.

PLOT SUMMARY:  Presidential candidate Frank Underwood faces uncomfortable questions about his foreign policy on the campaign trail and UN Ambassador Claire Underwood struggles to broker peace in the Jordan Valley.  Meanwhile Frank realises that Tom Yates has been investigating his past, including putting in a call to Tim Corbett from The Sentinees to the Jordan Valley to negotiate with Petrov in person but he demands Claire's resignation. Although Claire & Frank are united he still talks down to her in Cabinet.  She reaches out the Russian Ambassador but he is being recalled.  Finally Frank tells her she has been played and that he believes Petrov's interoperation of events rather than hers:  she says she'll resign.

Meanwhile Frank realises that Tom Yates has been investigating his past, including putting in a call to Tim Corbett from The Sentinel.   Yates tells Frank he turned tricks in college and attempts to seduce him.  Remy Danton apologises to Jackie Sharp for attempting to kiss her and she has doubts about sticking with the failing Underwood campaign.  And Doug Stamper's moves in with his brother, but this only reminds Doug of the family life he hasn't got. Finally, hacktivist Gavin Orsay confesses he's not who he says he is to Rachel's friend and offers her cash before leaving.
Posted by Bina007 at 17:23