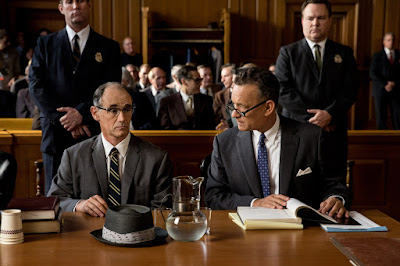 The film begins with a tour de force almost wordless sequence in which the Soviet spy, Rudolf Abel, picks up a secret message hidden under a park bench and takes it back to his Brooklyn apartment to unravel and decode.  Just as he's about to read it, the FBI break in and arrest him, but the hitherto silent and unobtrusive Abel manages to outwit them and destroy the message before being taken into custody.  The actor Mark Rylance is quite magnificent in the role, and it reminded me a little of his turn as Thomas Cromwell in the BBC's adaptation of Wolf Hall.  Both Cromwell and Abel are men who are seemingly ordinary, silent, expressing their feelings through the most microscopic of facial reactions, and yet with a hidden strength and conviction.  Abel's conviction, we find out, is that he is in his own mind an honourable man sent to do a job for his country, the Soviet Union. It is this laconic commitment that impresses his lawyer, Jim Donovan.  Donovan is also, in some ways, an everyman when we meet him. A successful lawyer certainly, but as played by Tom Hanks, the same man Tom Hanks always plays. A good and decent man. A man we can all get behind.  He thinks Abel deserves a fair trial and when it's clear that he hasn't gotten it, takes the case up to the Supreme Court, and even argues for a merciful sentence, much to the chagrin of his law firm and family.

So goes the first half of the film. Not so much a courtroom drama, to my surprise, but more a procedural that gets us to where we really need and want to be.  And that's in the Berlin of the early 1960s as the Wall is going up and the Cold War reaches its petrifying height.  It's now 1960 and Frank Powers has been shot down over the Soviet Union flying the USA's super-secret U2 spy plane.  Naturally this is of deep embarrassment to the USA just as the capture of Abel was embarrassing to the Soviets. A prisoner exchange is brokered and much of the pitched drama and humour of the second half lies in seeing our ordinary man try to arrange the exchange in the surreal and dangerous embassies and law offices of East Berlin.

Janusz Kaminski's photography here, using real locations in Berlin, is quite superb. The snowy, bleak, bomb-scarred streets are like something I imagined from a John le Carre novel. It's not Bond-glamourous but shivering cold and slippery.  The script is so efficient and precise that we quickly see the shifting motivations that Donovan has to navigate. The Soviets want their man. The CIA wants there's.  But Donovan also wants another prisoner - an economics student called Fred Pryor - who is of importance to no-one but himself.  Meanwhile all this is happening in the newly established East Germany, which wants to be seen as a big boy superpower at the same table as the Soviets and the USA both. The wonderful thing about the movie is that while it's certainly a thriller - we want to know if Donovan will be successful - it also questions just what success will look like.  What will Powers' life be like back in the USA, where everyone thinks he's dishonourable for not committing suicide and self-destructing his plane. And what of Abel?  Will the Soviets trust that he didn't give up any information, or shoot him for being a potentially turned spy?  As George Smiley would so well have understood, what are the victories in a war in which everyone is complicit, and in which honour is so hard to maintain?

At the end of this film, I was keenly concerned with the fate of Abel.  He was "my guy" as Jim Donovan might have put it. I was also impressed by the character of Jim Donovan, which I'm assuming is exactly what Spielberg wanted. Selah! Ever since the publishing industry conspired to destroy the reputation of our fictional hero lawyer Atticus Finch, we've needed a replacement. Maybe Donovan is "our guy".