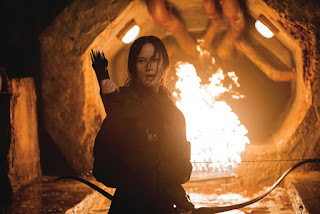 The movie begins with Katniss waking in a hospital bed, as often seems to be the case.  She's save in the rebel base of President Alma Coin (Julianne Moore with a Cruella De'Ville hairstyle - no spoiler there, then.)  Her childhood friend and fellow Hunger Games victor, Peeta (Josh Hutchinson) is still feeling the ill effects of President Snow's programming.  Coin is preparing her final attack on the Capitol to seize power from Snow but needs one final set of propaganda movies to bring District 2 into the fight.  And so we get was passes for intellectual discourse in the film, with Katniss' other quasi-boyfriend Gale (Liam Hemsworth) seemingly advocating a more harsh pragmatic approach to inciting the final act of the civil war than Katniss is comfortable with.

But all this is grist for the mill. We move through the motions of getting our plucky band of rebels into the Capitol with action set-pieces for 90 minutes until we get what counts for pay-off: a confrontation between Katniss and Snow.  When it comes,  it's remarkably calm and Katniss continues to be almost unreadably passive.

As the credit rolled I compared the ending of THE HUNGER GAMES to the other epic franchises. Where was the Catharsis and bittersweet emotion of LORD OF THE RINGS?  Nowhere.  What a pathetic ending to a once-great set of films.