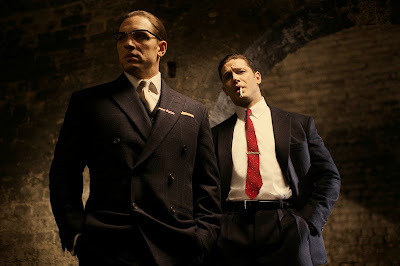 2015 was the year of Krays films and the one I anticipated was LEGEND, starring as it did Tom Hardy and both Ronnie and Reggie, beloved 1960s East End gangsters who infiltrated the highest levels of English society until they finally got banged up.  But I'm sad to say that the movie is boring to the point of switching off, bar a few good set pieces.  Unlike most critics I don't think it's the fault of Hardy.  Some have called his portrayal of Ronnie - a heavily doped up, heavy drinking, violent paranoid schizophrenic - too broad.  On the contrary, from the books I've read and documentaries I've watched, Hardy seems to get Ronnie just right. He loved his brother. He loved being a gangster. He loved the protection his aristo lover gave him.  But he was very very sick and almost impossible to control. I think there's no doubt that Reggie would have had a long and successful career as a criminal if it weren't for his brother running around with impossibly ambitious American schemes and generally running successful ventures into the ground.  And then, of course, there were the murders. That Hardy also manages to portray Reggie is a testament to his skill at essaying a subtler but still menacing character who was unfailingly loyal to his brother, even at the expense of his tragically doomed wife Frances.


No, the problem with LEGEND isn't Tom Hardy, it's the script and direction and overall conception of the movie, all of which are down to Brian Helgeland, the man behind the risible Russell Crowe ROBIN HOOD remake. If ever there was a movie crying out for Guy Ritchie to direct it, it's a Kray biopic.  Ritchie's a director who gets the mythologising of the East End, having done so much of itself.  Ritchie's a director who might have gone beyond merely calling his movie LEGEND and actually investigating how smart the Krays were at creating their own legends, and then manipulating both the East and West End into fearing and respecting them. The Krays sold their own legend and were masters of the media well before modern reality stars. Their story was far more than just a soupy love triangle.  And haven't we moved beyond that simplistic good woman falls for bad gangster, believes his promises and is betrayed stuff that we saw in the Godfather? To be sure, the story of Frances is sad, and to some conspiratorial, but it's in no way the most interesting thing about the Krays.  I'm far more interested in how they took out the Richardsons, kept ahead of the cops, basically got immunity from press investigation by virtue of Ron sleeping with a Lord, and weren't ever really taken down but rather self-destructed.  It's only to be expected that these two profoundly self-involved and self-aggrandizing men would destroy anyone in their both, Frances included. Moreover, it's profoundly dishonest to portray Reg as a kind of good boy pulled back in by a psycho brother.  He was brutal too, just in a more controlled manner.

So the Krays is a bad film containing a pair of very good performances. And it's all the fault of a writer-director who chose to focus on the banal and familiar rather than on what really what made the Krays unique, frightening and powerful - and on really investigating how they themselves worked the legend that Helgeland is now trapped inside.