SPIDER-MAN: INTO THE SPIDER-VERSE 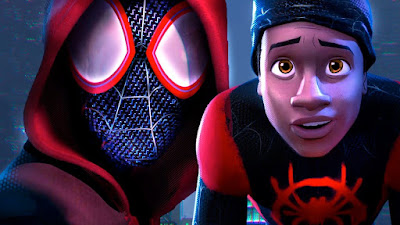 By now I'm not telling you anything you don't already know, but how wonderful to confirm that all the hype is justified - SPIDER-MAN: INTO THE SPIDER-VERSE is an absolutely delightful film! It's heart-warming, witty, visually inventive and has such a wonderfully light touch about diversity.  I cannot imagine a better version of Spider-man, and learning that this is based on a comic book series that pre-dates the latest live action version, I'm utterly disappointed that Sony/Marvel didn't take the bold step of using this continuity rather than reverting to the old one.

In this Spider-man story, Peter Parker dies early and his role as crime-fighting hero is taken over by a kind called Miles Morales (Shameikh Moore) - a young boy who just got bitten by a radioactive spider. Peter Parker  (Jake Johnson) is around just long enough to pass on a few tips before Spidey 2.0 is joined by a bunch of other Spideys from parallel universes - including a schlubby Peter Parker (Chris Pine), a female Spidey, a noir Spidey (brilliantly cast Nic Cage!) and even a Looney Tunes Spidey!  I am reliably informed that all of these are from old comic book series, and I have to say that I would pay good money to see a full length Spidey Noir movie starring Nic Cage.  All the different Spideys have to team up to save the world from evil Doc Ock - both sending back all the parallel universe spideys through Ock's evil machine, before Miles can destroy it for good.

What I love about this story is that doesn't condescend to it's young audience - giving them a story that hinges on parallel universes and rather hallucinogenic depictions of what it might look like to be in an unstable environment.  I also love the film's core message that anyone can be a hero - even if you haven't seen a hero on screen that looks like you before - whether because you're a girl, or an ethnic minority. In fact, anyone can be a supervillian too! Just look at female Doc Ock. It's a film that doesn't shy away from showing what it must mean to be a poor kid who gets selected for an elite school and has to leave his friend's behind. It's a film that will casually show a homeless person sleeping outside of a shiny building. And it's a film that will have a African-American/Latino kid speak to his mum in Spanish without feeling the need for subtitles. I love that courage, self-confidence and inclusion.

But most of all I just love how visually inventive this film is, and how manifestly the creators love comic books.  They have a real understanding about how the flow of panels works, how we turn a page on a story, even giving Miles thought bubbles as soon as he becomes a superhero.  This gives the film a wonderfully kinetic energy, real joy, and wit in also parodying the 3d blurring around its edges.

All in all, I really hope Sony/Marvel will capitalise on this film's success by continuing the Miles Morales storyline in animated form if nothing else.