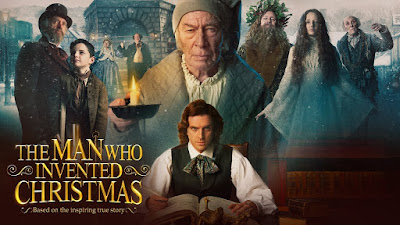 Director Bharat Nalluri (MISS PETTIGREW LIVES FOR A DAY) returns to our screens with a rather more well researched than had expected fictionalised account of how Charles Dickens wrote the iconic story A Christmas Carol. Adapted by Susan Coyne from a book by Les Standiford, the film paints a very convincing portrait of an author under great financial stress, with a taste for luxury, a large family to support, and an almost pathological fear of the poorhouse. Most fascinating is the portrayal of the relationship between Dickens and his father - a man who fell into debt, as a result of which Charles spent some of his childhood doing menial labour. Accordingly, this isn't a film about saving Scrooge (although it is) but about saving Dickens - allowing him to make some kind of amends with his father and truly celebrate the newly hyped holiday of Christmas which - lets be honest - wasn't so much invented by Dickens as Prince Albert. The second aspect of the script that I really liked was the idea of making the characters in A Christmas Carol come to life and lobby Dickens about what they want to happen to their characters. It lifted a rather conventional if well done costume drama into something more witty and revealing. The cast is also superb - featuring actors of the calibre of Miriam Margolyes and Jonathan Pryce (Dickens' father) and Christopher Plummer (Scrooge). If anything it's the rather banal Dan Stevens who lets down the show in the central role.