ON THE BASIS OF SEX 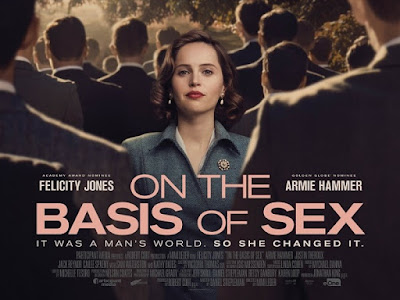 Supreme Court Justice Ruth Bader Ginsburg has become something of a cult figure among today's "woke" youth. She is often portrayed as The Notorious RBG on t-shirts and memes.  Seen as a champion of progressive values, and most particularly women's rights, her newfound fans are putting faith in her longevity to prevent a conservative takeover of the court.  Her legacy, marriage and mind were all celebrated in the recent, superb, RBG (reviewed here) which featured many interviews with her family. At the time, I commented how refreshing and perhaps surprising it was to see RBG as a young woman, in contrast to her current familiar image.

This new film, written by RBG's nephew, focuses on that young smart woman and how she established herself as one of the pre-eminent sexual discrimination lawyers.  It opens with Ruth as one of a handful of female students attending Harvard Law School, sees her forced to switch to Columbia to support her husband's career, rejected by all the major law firms, and almost as a second choice, become an academic.  Her lack of appellant experience becomes alarmingly clear when she takes on a landmark legal case that the ACLU hasn't the time for - defending a MAN who has suffered from discriminatory legislation.  She works in partnership with her tax lawyer husband Marty, preparing a brief and then arguing in front of the appeals court, leading to a classic final act stirring speech that wins the day. In a final, rather deliberately emotional scene, we see a young RBG climb the steps to of the Supreme Court to argue another landmark case, transitioning to the present day Justice.

As directed by veteran Mimi Leder, this movie has a charming and handsomely old fashioned feel of telling a character driven story patiently and building toward a set-piece finale. The script is just fine - and perhaps best in using Ruth's daughter as a provocation toward more strident and direct action. By contrast, the motivations of the dean of Harvard Law School who at once lobbied to admit women but then is seen as so sexist remain frustratingly opaque. Felicity Jones makes only a cursory attempt at RBG's accent and neither she nor Armie Hammer as Marty seem to age much, even as they acquire a teenage daughter.

And yet for all these faults, I still found this a fascinating and satisfying film, with enough provocative angry-making insults to our heroine, and a sense of purpose and triumph at the end.  It makes a nice pair with the aforementioned documentary - although if you only have time for one, I would still go for the doc, for its wider scope and greater insight.