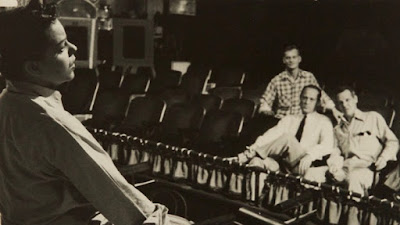 SID & JUDY is a masterfully edited and constructed documentary about the latter half of Judy Garland's career, as seen through the autobiography of her third husband Sid Luft.  He meets and marries her shortly after her ignominious sacking from MGM, addicted to pills, with a reputation of being unreliable.  So young to be seemingly on the scrapheap, Luft masterminds her return to the big screen in the Warner Brothers funded remake of A STAR IS BORN (reviewed here).  It's so iconic now that it's easy to forget that it was a financial failure, and Garland famously didn't win the Oscar for it.  The wonder of this film is to show us how talented Judy was, despite the fact that Luft continued to enable her with drugs.  The director, Stephen Kijak, contrasts the various versions of its most famous number - recorded multiple times over many months because Warners switched to Cinemascope mid-way through the shoot. You see Judy's stamina - her ability to hit her mark - but also her subtle versatility in performance. You also get to know and admire Sid's honesty and sardonic wit. He's scathing about his own willingness to enable her drug use to get the film done, and it's so sad to realise how much he really did love her, and try to get her off drugs. At his wits end, he pretends to leave her - she calls the press, and the lawyers tell him to take the way out - but he tells us they don't realise he's in love with her.

After the STAR flop, Luft reinvents Judy as a touring extravaganza, with sell-out shows in Carnegie Hall and the London Palladium and every great venue in between, and finally gets her the CBS TV show. But by this time, she's being manipulated and defrauded by her new agents, and Sid is cut out of her life.  The story continues through the highs and lows of her TV show to her death. Even then you feel Sid still loved her. You also feel the tragedy of her life - her scathing self-mockery, her anger, her desperation to be more than just Dorothy, or the Man That Got Away, or The Trolley Song, for people. I was truly chilled by the denouement.

That I should feel so completely invested in this documentary is down to the skill of the director in recreating her story in a way that felt so vivid and immersive. He cleverly intercuts TV and film footage from the time, so we hear a lot of Judy herself in interviews. But we also get a really superb set of  voice performances from Jon Hamm and Jennifer Jason Leigh as Sid and Judy respectively. Indeed, it's ironic that as Renee Zellweger is doing lots of PR for her new take on Judy, it's probably Jason Leigh who gets the closest to this brilliant, fragile, angry, funny, complicated woman.

SID & JUDY has a running time of 95 minutes. It will be shown on US TV on October 18th. It will play the BFI London Film Festival, but it does not yet have a commercial release date for the UK.
Posted by Bina007 at 18:50