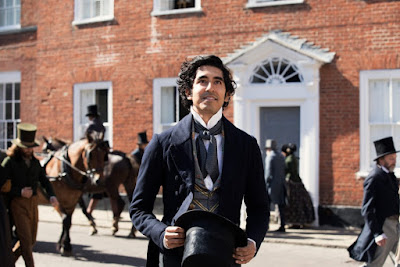 Armando Iannucci's adaptation of Dickens' beloved autobiographical bildungsroman is a complete triumph.  Thanks to a wonderful adaptation by Simon Blackwell; effervescent and imaginative visuals; and a wonderful set of performances, this really is one of my all-time favourite versions of the tale.  I think it's because of the wonderful way in which it captures the love within the novel - the wonderful spirit of acceptance, love and compassion contained in the Peggotties assembled family - or Aunt Betsy Trotwood's care of Mr Dick - or David Copperfield's eventual reconciliation with Mr Micawber.  The film also captures Dickens' wonderful humour - whether in his sharp-eyed satiric portraits of the villains, or in the linguistic wonders of Micawber and Yarmouth. The film is also a really good portrayal of the author as a cipher for Dickens, and places the act of writing and imagining and rewriting at the front of its visual style.  Those of us familiar with the fate of Dora in the novel will find a quite elegant, more concise, and yet somehow similarly moving resolution here. But the movie never shies away from the darkness in Dickens' portrayal of violent, oppressive marriages - cruel poverty - social snobbery - and fallen women.  Most of all, it's a beautifully nuanced portrait of mental illness - whether Mr Dick's fixation on Charles I, Steerforth's suicidal depression or even Micawber's self-delusions.

In front of the camera, Dev Patel really is the most beautifully cast David Copperfield - all gangly wide-eyed love and optimism even in the worst of circumstances. But his David is never a patsy, even when falling for the dippy Dora.  He shows his anger, often physically, and fights and works for his future.   Patel handles everything from slapstick to righteous anger to compassionate frustration with the best of good humour. He's one of those actors that it's simply a pleasure spending time with.

In the supporting roles, I was struck by Rosalind Eleazer as Agnes - showing real love, strength, smarts.  An actress I would hope to see so much more of.   Daisy May Cooper is just heart-meltingly lovely as Peggotty, and Tilda Swinton - who starts off as just another Tilda Swinton eccentric - shows real depth of emotion and care as Aunt Betsy.  But perhaps the most surprising turn was from Hugh Laurie as Mr Dick. Every big cast drama has its Papageno, and with Copperfield it's usually Micawber. And Peter Capaldi is just find as Micawber. But there's something so quietly funny, moving, whip-smart about Laurie's Mr Dick that steals every scene that he's in, and must surely be a contender for Best Supporting Actor awards.

I really can't fault this film. And it's worth noting that Mr007 has never read the book and loved it as much as I did.  And that's a rare feat - to condense an epic novel but lose none of its essence, and to also please the casual viewer. Kudos to all involved.