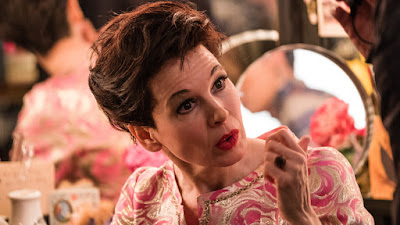 It's been a while since I watched JUDY and my reluctance to review it has been the unwillingness to commit to paper what a truly mediocre film - what a hammy absurd central performance - is gaining such awards success. I cannot for the life of me fathom why Renee Zellweger is being heaped with awards for a performance that verges on pastiche and is never convincing. And the only answer I can find is that this is the ultimate awards season Mercy Fuck.  Hollywood loves a broken bird, especially a woman tormented by her own self-image, and in Renee they have found the bats-squeak whisper of an echo of Judy Garland's psychological trauma.  I feel they aren't so much praising Renee's performance as applauding her mere survival, albeit in a weird Jennifer Lawrence-lite post surgery existence and speaking with a bizarre southern drawl.

But let's get back to the film. It focuses on Judy in the final years of her life - battling Sid Luft Rufus Sewell) for custody of the kids - broke - playing gigs in London to pay the bills.  She's a neurotic, lonely alcoholic, always vulnerable to a young charmer (Finn Wittrock) who'll promise her riches but usually ends up swindling her.  Judy has to be manhandled on stage by Jessie Buckley's sympathetic stage manager.  We're meant to recognise her as still capable of being a true star through the eyes of her adoring gay fans.  But really this is just a pathetic portrait of a broken woman, running several leagues below her peak power.

Renee Zellwegger doesn't look like Judy, despite the short brunette wig and the costumes that ape her London look.  She doesn't sound like Judy when she sings.  She adopts a kind of slanting, stumbling walk and inverted kind of beaten up posture that makes us think - wow - Renee is broken - rather than telling us anything real about Judy.  Worse still, the film just isn't that well directed.  Rupert Goold - a stage director best known for the recent TV version of the Henriad -THE HOLLOW CROWN - doesn't have any visual flair, and doesn't really bring any insight to staging the show tunes.  And the script is really workmanlike and cliched.  Do we really need to have a lonely Judy having supper with a fawning gay couple, who have no interior life or meaning other than to just be cliche fawning gay fans?

The only parts of this film that I thought had real truth to them were the flashbacks to Judy's childhood as an abused child star, forced to slim, put on pills, with every date stage managed.  But even here the movie doesn't have the balls to depict the sexual abuse she suffered at the hands of Louis B Mayer.