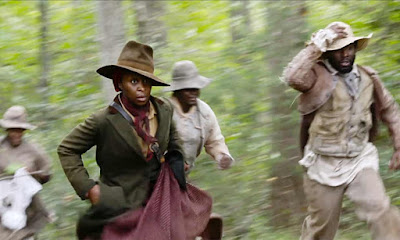 Watching HARRIET a day after QUEEN & SLIM was quite the provocative double-bill. The former is a film about a true-life hero - a woman who escaped from slavery and then went back to free others - a woman who became a Union scout in the civil war, and led a military raid - a woman who campaigned for women's rights.  What would she make of contemporary America - the world where QUEEN & SLIM are forced to go on the run after facing a racist police attack?  Would Harriet feel her race had progressed at all? And what of her sex?  In HARRIET we see her under-estimated by Thomas Still - as just a petite illiterate woman who could never be an Underground Railroad conductor.  And we don't see it in this film, but we know she was never paid properly for her work as a Union Scout because she was both black and a woman. That misogyny is still present in QUEEN & SLIM - not least in the character that Bokeem Woodbine plays.  And what of the meaning of iconography and history?  Harriet Tubman's story is not often taught in schools - Steve Mnuchin resisted putting her on the twenty dollar bill, leaving slave-owning Andrew Jackson on there.  Neither the film HARRIET nor QUEEN & SLIM have had the award-season recognition they deserve. Heck, HARRIET took decades to even get made. Taken together, they make for deeply, provocatively, depressing viewing.  Slavery is illegal now, but we have a white supremacist president. A white man could walk with impunity into a rich, FREE, black woman's house in 1850 and brutalise her.  A white police offer shoots an educated, FREE, black woman in the leg in 2019 without impunity....

Anyway - let's get to the film review! HARRIET is a handsomely made biopic about a truly heroic woman. Cynthia Erivo (TV's THE OUTSIDER) plays Harriet with a fierce, earnest, anger and an almost disturbing religious certainty.  It's interesting to me that writer-director Kasi Lemmons' chooses not to interrogate how far Harriet's religious visions were just the product of being brutalised with a head injury.  In general, this is a film of earnest faith, and that may be off-putting to some. The only doubt shown that her visions are just brain damage is signalled by a character who is clearly sexist so we're being told not give them credence. I did however like how a preacher (Vondie Curtis-Hall) that we are led to believe is an Uncle Tom appeaser actually turns out to be a node on the railroad, showing us the difficult choices facing black people - having to show an outward face of conciliation while being subversive.

Harriet never doubts herself, though, and that makes her an almost unapproachable, and certainly irreproachable heroine. Characters in this film are either all the way good or bad. The most interesting character is therefore that of Marie, played by Janelle Monae (HIDDEN FIGURES). She's an elegantly dressed free rich black woman who is roundly censured by Harriet for not being sympathetic for what it means to be a slave. But she shows her own heroism in the end. I also liked the character of a young black boy who starts off helping slave-catchers before finding his conscience.  It's also rather brave to show that black people and indeed native Americans were complicit in slavery.

But as we rapidly move through Harriet's work on the railroad into the civil war, I did wonder at Kasi Lemmons omitting Harriet's involvement in the notorious and disastrous Harper's Ferry Raid by John Brown. Maybe this was too difficult and complicated to include - and it remains a rather controversial event. Brown was an abolitionist and so one of the good guys right! But then again his rogue militancy didn't help the cause - in fact in made it harder for the abolitionists in congress to deal with increasingly paranoid slave states. The problem is that if we don't deal with Harriet's controversial judgements, then we are left with nothing more than almost religious icon.

Still, there's a magnetic fascination with Erivo's performance. And for those of us outside of the US who have little US history in our schooling, the film serves a worthy purpose of educating us. I hadn't been aware, for example, of just how many free blacks lived alongside enslaved blacks in Delaware, and the legal and emotional complications of mixed marriages. I also loved John Toll's cinematography.  There's a kind of cliche of the southern slave film, bathed in warm yellow light and the heat of the cotton plantation.  It's good to recognise how far north slavery went.

HARRIET has a running time of 125 minutes and is rated PG-13. HARRIET played Toronto 2019 and was released in the USA and UK last November and is now available to rent and own.
Posted by Bina007 at 11:49