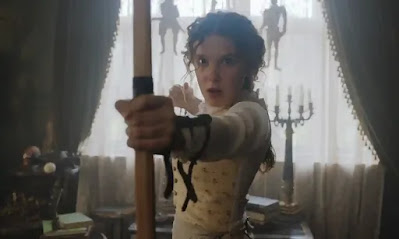 I thoroughly enjoyed ENOLA HOLMES - a wonderfully funny, earnest and kinetic young adult detective caper starring Millie Bobby Brown as the younger sister of Mycroft and Sherlock Holmes.  In this version of fictional history, Enola (Brown) is raised by her eccentric but learned mother (Helena Bonham Carter) until said mother mysteriously vanishes.  Stuffy conservative Mycroft packs Enola off to a boarding school but she soon escapes to find her mother.  That first mystery isn't really solved, setting us up for a sequel, although it is hinted that mum is a radical activist feminist. So we get a second mystery: just who is trying to assassinate handsome but feckless young Lord Tewkesbury (Louis Partridge).  As befits a progressive work, it is Enola who saves Tewkesbury rather than the other way around, and she solves the mystery of the case before her indulgent brother Sherlock (Cavill). The result is a pleasingly feminist and funny caper that shows just how good Millie Bobby Brown is at comedy. I doubt many other actresses could get away with breaking the fourth wall as often and with such wit as she does. I am very much looking forward to the inevitable sequel.
ENOLA HOLMES has a running time of 123 minutes and is rated PG-13.
Posted by Bina007 at 12:46