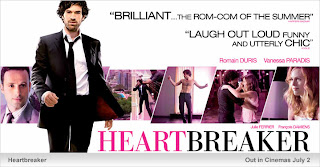 French TV director Pascal Chaumeil makes his big-screen debut with the commercial hit, HEARTBREAKER. It's a whimsical romantic-comedy starring Romain Duris (THE BEAT MY HEART SKIPPED) and Vanessa Paradis (er...Chanel ads?). Penned by Laurent Zeitoun, Jeremy Doner and Yohan Gromb, the plot is driven by a conceit that is so palpably stupid that the film never really recovers from it. Duris plays Alex - a man who is hired by the friends and family of women who are stuck in awful relationships but can't see it. He comes along, charms them, and they, realising how crummy their current boyfriends are, dump them. Problem is that in this particular set-up, Vanessa Paradis' Juliette boyfriend Jonathan (Andrew Lincoln) isn't actually crummy. In fact, he seems to be genuinely in love with Juliette and vice versa. So, if Alex hadn't come along with his Patrick Swayze dance moves, all would've been well. This is a major problem for a romantic-comedy where we're meant to be rooting for a couple to get together.
The humour is sporadic, sometimes plain weird and lazy. The caper aspects - how the heartbreaker team set up the meet-cutes - are just silly. And call me pragmatic, but I was wondering why, if you had such good IT and general spy skills, you wouldn't be using them for something more lucrative and impactful. There's some attempted humour at the expense of Juliette's nympho best friend, but that seems discordant when the tone the director is trying to go for with the main plot is one of whimsical romance. And then, of course, there's the idea that Alex and Juliette fall in love over a shared passion for the film DIRTY DANCING. This could've been tremendous, but I found the pivotal dance scene somehow lacking in spark and fun. Romain Duris seemed to be putting his all into the role, but Paradis seemed rather cold and disengaged. That is, to be sure, part of her character, especially in the early scenes, but we should've seen more of a progression.
Overall, the film struck me a laughably silly but never so silly as to make me laugh. It looks like a hundred minute commercial for Monaco and has very little merit other than that. God help us for the remake. I predict some piss-poor Gerard Butler-Katherine Heigl set-up.
HEARTBREAKER opened in summer 2010 and is available on DVD and on iTunes.
Posted by Bina007 at 20:59