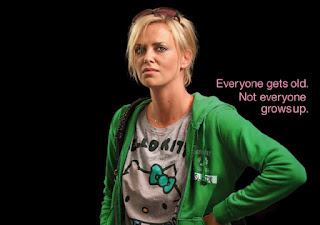 Forced into house arrest after a particularly nasty ankle injury, I have decided to finally get around to reviewing all those releases that I didn't get round to originally.  First up, YOUNG ADULT.....

YOUNG ADULT is a brilliantly scabrous tragicomedy from the writer and director behind JUNO. It's  about a narcissistic delusional writer of Young Adult fiction who returns to her home town to break up the marriage of her high school sweetheart. It's a testament to the nuance and bravery of Diablo Cody's script and Charlize Theron's lead performance that she allows Mavis to be quite unlikeable but that we still care about her emotional journey. Mavis can be deliberately mean-spirited - she is horribly rude to the disabled town geek (Patton Oswalt) and shamelessly uses him as a drinking buddy while she waits to pounce on her beloved Buddy (Patrick Wilson).  But she's at her most compelling when she's just plain disconnected - like when she asks the provincial sales assistant if the store stocks Marc Jacobs.  She's a girl who's ridden along on her good looks - she's trumpeted as the town's success - all the more tragic then that the books she writes aren't selling, and she's desperate for a family.

YOUNG ADULT is gritty in a way that few movies dare to be.  DP Eric Steelberg (UP IN THE AIR) zooms in on Mavis itching her balding scalp and spitting into an ink cartridge to make it work.  It's a signal that this is a movie about the way our bodies betray us as - about the dangers of making a myth out of high school love. Then again, Cody's script doesn't dwell on that physical frailty long enough to beg our sympathy. There's a cool matter-of-factness to both Mavis and the movie.  The grittiness extends to the narrative arc.  Sure, there's a scene of "emotional catharsis" near the end, where key facts are revealed, but there's no easy redemption or new-found likeability.  And the relationship between Theron and the schlubby Matt goes no further than it would likely go, rather than giving us a nice rom-com pay-off.  In fact, now I think of it, there's little humour in the movie at all, and certainly very little that's do with the narrative arc. Rather, there are some very funny sly scenes where Cody winks at her critics who wonder how she writes like a "teen".

I loved YOUNG ADULT even though it didn't really make me laugh, never gave me any emotional release, and didn't really teach me anything I didn't know. There's just something refreshingly honest about a movie that dares to be disliked. It's like the pitch for Seinfeld - no-one hugs, no-one learns everything.

YOUNG ADULT was released in winter 2011/2013 and is now available to rent and own. Charlize Theron was nominated for a Golden Globe.
Posted by Bina007 at 20:21