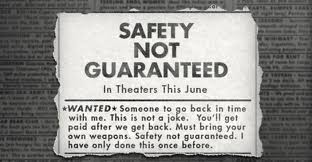 I guess it was a sure bet.  Any movie based on a cutesy internet meme (see above graphic) was gonna rub me up the wrong way.  SAFTEY NOT GUARANTEED is the kind of hipster, quirky, indulgent comedy that I hate.  In fact, even calling it a comedy is a stretch given that it peddles the gentlest of gentle comedy.  I only laughed out loud three times, so on that basis it fails the Wittertainment 5-Laughs rule.  I predict that this will end up like last year's lauded hit, LIKE CRAZY. That was another movie the indie community loved and I hated. It too ended up in a bidding war at Sundance only to fail at the box office.

The problem with the film is that everything about it is so contrived that goofy that there's nothing to relate to - no point of entry unless you're also a wannabe oddball hipster.  It also contains precious few proper jokes (as mentioned above), and uneven tone, as it skirts past various genres. I blame Derek Connolly's pretentious script and Colin Trevorrow's lacklustre direction.  Performances are mostly so-so.  Aubrey Plaza (PARKS AND RECREATION) does her snarky, moody thing, but predictably melts when she meets Mark Duplass' oddball paranoid wannabe time-traveller.  They meet up because she an intern at a magazine and her boss Jeff is faking interest in the madcap scheme so as to write a funny story on the guy.  Jake M Johnson provides the only real laughs as Jeff, nicely playing against the "nice Nick" character in THE NEW GIRL.  As for Karan Soni's Arnau, it's nice that we people of Indian origin are starting to get more airtime in movies, but does it always have to be a clichéd geeky hard-working student? I'm starting to get offended.

SAFETY NOT GUARANTEED played Sundance 2012 where Derek Connolly won the Waldo Salt Screenwriting Award. It also played Sundance London. It will play SXSW 2012 and will be released in the USA on June 8th.
Posted by Bina007 at 23:18