THE WAY WAY BACK 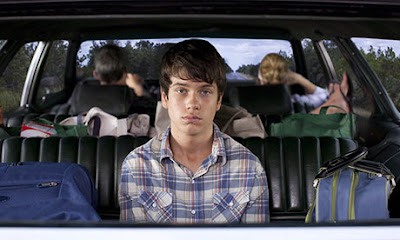 You can listen a podcast review of THE WAY WAY BACK here, or subscribe to Bina007 Movie Reviews in iTunes.

THE WAY WAY BACK is a curious film - often lacking in pace, often obvious in its plot choices, with a style of humour that barely breaks in to laugh-out-loud comedy.  And yet... and yet... there's something about its loveable quirky homespun style that is memorable and enjoyable.

The movie is a classic teenage coming-of-age story set in a contemporary east coast holiday resort that has a ramshackle nostalgic early 80s air.  The teenager in question is a kid called Duncan (Liam James) whose vulnerable and easily led mother Pam (Toni Colette) is dating a passive-aggressive philandering slick-talker called Trent (Steve Carell). Hang-dog, ignored or insulted, he escapes the rather reckless and juvenile adults who are supposed to be supervising him, and wends his way to a ageing, crusty, old school waterpark, where he finds a new kind of family - the kind that boosts your confidence, brings you new opportunities and broadens your horizons.  The employees are led by the frustratingly youthful cool boss Owen (Sam Rockwell).

There's a lot to love in this tale and it's usually in the unspoken margins of the film.  The on-off romance between Owen and Caitlin (Maya Rudolph) that becomes apparent, in all its nuances, in the spaces between the script.  The joy of seeing Steve Carell playing a properly nasty character.  The nostalgic feel of the production design.  And there's just enough dark backing to the mirror to keep the film sharp.  The holiday escapism of the adults really does have damaging consequences - both for them and their kids.  And there's a real truth to the desperation and vulnerability of the divorced women - played for laughs by a deliciously blowsy drunk Allison Janney, and dramatically by Toni Colette.  So, for all its predictability, kudos to directors Nat Axon and Jim Rash (who wrote THE DESCENDENTS) for pulling it together.

THE WAY WAY BACK has a running time of 103 minutes and is rated PG-13.

THE WAY WAY BACK played Sundance 2013 and was released earlier this year in the USA, Canada, Sweden, Denmark, Norway, Israel, New Zealand, Finland, the UK and Ireland. It opens on September 12th in Singapore, on October 2nd in Belgium, on October 3rd in the Netherlands, on October 24th in Germany, on November 15th in Spain, on November 21st in Argentina, on November 27th in France and on December 5th in Italy.