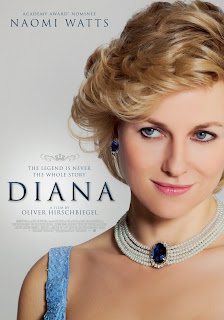 You can listen to a podcast review of DIANA below, or subscribe to Bina007 Movie Reviews in iTunes.


Oh dear. I really wanted to like the Prince Diana movie, imaginatively titled DIANA, if only to put two fingers up to the mainstream elitist critical opinion. But the film flops heavily onto our screens with little wit and less understanding - a soppy, weepy love story that hasn't got the balls to tackle the fascinating issues that the Princess embodied. The film never takes on the Royal Family apart from a few shy hints that Diana would have liked to have seen her children more. Charles and Camilla emerge unscathed. The fascination that Diana seems to have had for spiritualists and quacks is unquestioned and unexplored. The influence of her butler, Paul Burrell, uninvestigated. And her capricious relationship with the media - hunted but also manipulating - only very gently hinted at. This movie lets everyone - including the late Princess - off the hook.
So what DO we get? We meet Diana as a lonely woman, fascinated with healing, who falls for a leading heart surgeon, Hasnat Khan.  They begin a shy courtship - an odd couple romance.  She's the Princess who loves classical music and exercise. He's the Pakistani surgeon who likes junk food and jazz.  When push comes to shove, he isn't willing to upset his traditional Muslim family or indeed to have his work compromised by her fame.  She reacts rather childishly by trying to make Hasnat jealous by publicly being photographed with Dodi Fayed, leading to their fateful crash in Paris.  Yes, it's tragic that the mother of young sons died, and even more tragic that her celebrity prevented her from enjoying a fulfilling relationship (if true).  But there is no emotional truth in this movie.  No nuance, empathy or insight.  It's as vacuous as Hello! magazine, but at least THAT has the benefit of the real Princess, rather than poor Naomi Watts, in a career-embarrassing performance, tilting her head to the side and fluttering her eyelids in a succession of bad wigs.
The mind boggles. How could director Oliver Hirschbiegel, who directed the incredibly powerful, intelligent and affecting Hitler's bunker film, DOWNFALL, have produced something so insipid?  I suspect the blame lies partly with the timid producers, but also with screenwriter Stephen Jeffreys, who wrote a movie so risible it earned the shortest review this blog has ever published, for THE LIBERTINE.  One can only wonder what kind of sympathy Sofia Coppola might have brought to this story, after her luminescent depiction of Marie-Antoinette.  At the very least, her product placement would have been less crass than the long lingering handbag close-up that opens this film.
Eheu o me miserum.
DIANA has a running time of 113 minutes and is rated 12A in the UK for strong language, brief land mine injury and surgical detail.
DIANA is on release in the UK, Hungary, Iceland, Ireland and Poland. It opens on September 26th in Belgium, Denmark, Portugal and Serbia; on October 3rd in France, Italy, Russia and Sweden; on October 10th in Australia, Bahrain, Kuwait, Oman, Qatar, the UAE, Estonia and Norway; on October 17th in Hong Kong and Japan; on October 25th in Brazil; on November 1st in the USA; on November 7th in Argentina and Finland; on November 14th in the Netherlands; on November 28th in Greece and Singapore; on December 13th in Spain; on January 9th in Germnany; and on February 6th in Chile.
Posted by Bina007 at 20:54