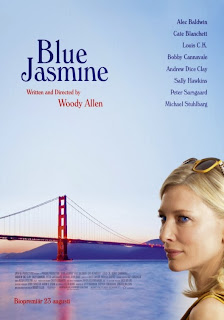 Woody Allen's latest movie, BLUE JASMINE, isn't better than ANNIE HALL or MANHATTAN, as some over-sugared critics have claimed. But it is the best of his late films, featuring as it does a superlative performance by Cate Blanchett in the title role.  She plays the spoiled, self-deluding wife of a hugely rich financier (Alec Baldwin), who we discover was actually a Bernie Madoff character.  He swindled his clients, including Jasmine's earnest sister Ginger (Sally Hawkins), gets taken by the Feds, and leaves Jasmine crushed, shocked, a borderline alcoholic with severe mental problems.

This is how we meet Jasmine - talking to herself on a plane to San Francisco, fashioning a narrative of her life that is elegant and graceful - where she is the victim.  This seems to be her only way of coping.  By struggling through courses to become computer literate she can kid herself that she'll become an interior designer, and resume her place in society as something "substantial". When she lies to her wealthy diplomat suitor (Peter Sarsgaard, thankfully not in a sleazebag role), it isn't so much that she's wilfully lying to him, but that my projecting an image of elegant accomplishment, she can reclaim herself.  It's a survival strategy.

The darker side of this vulnerability manifests itself in how far Jasmine was complicit in her downfall - how much did she really know about her husband's affairs and criminality?  Her stepson certainly judges her harshly, and part of the journey of this film is to get to the root of that problem.  Jasmine also proves to be a hugely disruptive influence on her sister, who under Jasmine's criticism of her current squeeze Chilli (Bobby Cannavale) reaches for something apparently better in Louis C.K.'s romantic sound engineer.   Ginger plays, in a minor key, the same theme as Jasmine - with her issues of self-invention and self-delusion.

The movie is dominated by Blanchett, and rightly so. She alternates between serene confidence and broken vulnerability and everything in between.  But there are other, surprising, moments of brilliance. For instance, seeing Andrew Dice Clay - a figure of menacing fun in Entourage - play a wise, angry ex-husband.  Or Louis C.K. play a soft, romantic.  Or Bobby Cannavale as a loveable rogue.  But the real praise has to go to Woody Allen who, after years of being the most environmentally sustainable of screenwriters, has done something genuinely new and genuinely brilliant.  Many people have tried to put the story of the financial crisis on screen,  but this sideways look at the psychological and emotional fall-out is perhaps the best depiction of its real impact, away from Wall Street.  And one would be hard-pressed to find such a rounded, nuanced and sympathetic middle-aged female character in cinema.

A podcast review of this film is available here:


BLUE JASMINE has a running time of 98 minutes and is rated PG-13 in the USA and 12A in the UK for infrequent strong language & moderate references to sex & suicide.

BLUE JASMINE opened in August in the USA, Slovakia, Canada, Norway, Belgium, Denmark, the Netherlands, Poland, Sweden, Greece, Hungary, Finland and Romania. It is currently on release in Australia, Portugal, Estonia, Iceland, Lithuania, France, South Korea, Russia, Ireland, Turkey and the UK. It opens on October 10th in Argentina and Singapore; on October 17th in Hong Kong; on November 7th in Germany and on December 5th in Italy.
Posted by Bina007 at 06:41