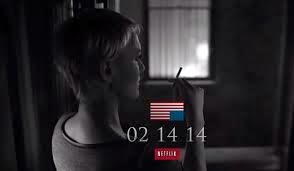 PLOT SUMMARY: Vice President Frank Underwood (Kevin Spacey) manipulates President Walker (Michael Gill) into secretly buying and stockpiling Samarium in order to bypass the Chinese trade boycott and prevent an energy crisis. He plots to undermine the return of Ray Tusk (Gerald McRaney) to the President's good graces.   Ray confronts Frank and asks if he is deliberately trying to sabotage the President (an astute guess). In a comedic aside, Frank stresses about making the first pitch at a high profile baseball match.  However, as he's on the verge of pitching the ball, the lights cut out, and of course it's Ray who's blackmailing the President by shutting down his power plants.  Frank urges the President to take control of the plants.

Meanwhile, Lucas Goodwin (Sebastian Arcelus) is in prison, facing charges of breaking into the data center, and the naked pictures of Zoe found in his apartment are used against him. We realise that Doug Stamper (Michael Kelly) is orchestrating the trumped up charges.  Aware that Lucas' ex-editor Tom Hammerschmidt (Boris McIver) is still investigating Zoe and Peter's death and Rachel's disappearance, Frank calls him in and mockingly warns him off. Meanwhile, Stamper's men threaten to implicate Janine Skorsky in Lucas' crimes Constance Zimmer unless she testifies against him.  As a result, she tries to persuade him to take the plea.

COMMENTS: Not much to like in this episode of horse-trading and general threats.  I'm not massively convinced by the chemistry between Jackie and Remy and I grimace at the idea that the relationship might become a major plot arc. The Lucas-in-jail story seems to go through its machinations - again not  much to see here except pious earnest angst.  It feels like half a season since I cared about Janine. The only really clever scene was the final one between Rachel and Stamper - I'm really not clear how far she's playing him and that's fantastic.
Posted by Bina007 at 06:51