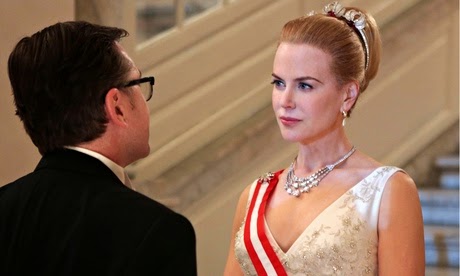 The story should've been intriguing. It is one of an iconic American movie star - one of Hitchcock's famous blondes, who traded it all for an arranged marriage to an ageing lothario who also happened to be the monarch of a bankrupt French protectorate. She must've known full well of Monaco's precarious situation behind the glamorous facade of the casinos. So why did she do it? And did she really expect to be allowed to act after she did?  But sadly this movie joins the story after Grace Kelly's marriage. She already has two children and though rarely seeing her husband and cold-shouldered at court, seems to be in love with him. Alfred Hitchcock offers her the lead role in Marnie, but she turns it down, because she's going to support her husband and never act again.

This should have been a moving and deeply relevant film about the conflicts that career women face and a sorry tale of delusion after a whirlwind marriage. But instead, what we have is a very cursory attempt to show conflict - essentially Nicole Kidman's Grace looking disturbed into the middle distance, or humiliated for having a short haircut at luncheon - but no real emotion or excitement.  Rather the message of the film is essentially a conservative one - that it is the job of a woman to stand by her man for the sake of her children and sacrifice her own concerns. And if she needs to have a PRINCESS DIARIES makeover at the hands of a highly camp French Count played by Derek Jacobi, why then, all the better!

This is a movie of surfaces - beautiful costumes, beautiful locations, but not NOT beautiful people. I'm sorry but I'm just going to have to say it. Nicole Kidman is simply too old to play Grace of Monaco.  The wigs are too obviously wigs.  The botox and fillers insufficiently obfuscated by the soft focus.  It's hard to hear the message of the film - about the grim artifice behind the fairtytale - when the grim artifice is all too visible.  Of course one could forgive all this - I was once moved to tears by Mark Rylance's Cleopatra - were the acting sufficiently good.  And if it isn't, from an actress as worthy as Nicole Kidman, should we perhaps blame the director, the clumsy Dahan, or first-time screen writer Arash Amel?  Or should we, per Dahan, blame producer and extreme-editor Harvey Weinstein who has all but disowned the film?

I'm not sure, but what's utterly frustrating is that there is something to this film - and that's in its politics.  After all, this was a fascinating period for Monaco and for Grace's husband Prince Rainier. He inherited a poor kingdom dependent on gambling and tried to limit the power of the monarchy, widen the economic base and redistribute wealth.   He did so in the teeth of an economic blockade from a France desperate for tax revenues to finance the Algerian war.  All of this intrigue - the sticky hands of Ari Onassis (a ludicrous hack-impression from Robert Lindsay) - the attempted coup by his sister - are true and bear further investigation.  But one can't take the attempt seriously when Dahan/Amel want us to believe that the best way to create a red-herring baddie is to dress her in Miss Haversham-black.  Or when they want us to believe that the diplomatic crisis was solved by the giving of a ball and a Don't Cry For Me, Monte Carlo speech.  Shame on them all for not tackling the gritty issues - is a tax haven really the poster child for democratic liberty? - and all their contradictions.

GRACE OF MONACO played Cannes 2014 where it was excoriated by the press. It opened in May in France, Germany, Italy, Kuwait, Finland, Poland, Belgium, Denmark, Hungary, Macedonia, Portugal, Serbia, Singapore, Estonia, Spain, Norway, Sweden, Israel and Lithuania. It opened earlier this month in Australia, the Netherlands, the UK, Ireland, Taiwan, South Korea and China. It opens in Japan in October and in Brazil on January 1st 2015.