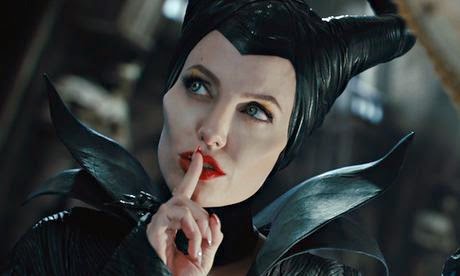 I fell in love with MALEFICENT despite its obvious weaknesses. Maybe it's because I'm one of those kids who was terrified by the Disney villain but also kind of wanted to be her! She was wicked and sarcastic and marvelous in the way that made Alan Rickman a scene stealer in the Kevin Costner ROBIN HOOD - that supercilious British aristocratic charm that makes Americans fawn over Dame Maggie Smith in Downton Abbey. That, and I'm a sucker for a gothic fairy tale - and a subversive Angela Carter investigation of the sexual motives at their heart.

So in this movie, per Linda Woolverton's (BEAUTY AND THE BEAST) script, Maleficent was once a wonderfully romantic innocent child who happened to fall in love with an ambitious man who used her cruelly, physically and violently to gain the throne. Mutilated and bent on revenge she curses the new King Stefan's daughter Aurora and he descends into paranoia, sending his daughter off to a cottage in a forest guarded by three good fairies. But in another twist, they are self-absorbed and incompetent, and it's only Maleficent's at first-reluctant, and then eager, care that keeps the girl safe. In a wonderful irony, the girl herself is not insensible of this care, calling Maleficent her "fairy godmother", and as all of us who have seen FROZEN know, true love's kiss can be recast - this time as a maternal rather than sibling bond.

Am I spoiling the ending? No, I think it's telegraphed widely beforehand.  As soon as we see the perfectly cast, almost fey Elle Fanning as Aurora gushing over her fairy godmother, the brilliantly comedically uncomfortable Maleficent, we know where the story is heading.  And perhaps this is the place to point out how marvelous Angelina Jolie in the role. Of course, her looks are perfect for Maleficent, and enhanced further by super-sharp prosthetic cheekbones.  But it's her rarely scene comedic acting that seals the deal  - the bemusement and discomfort when the cute baby Aurora (played her real-life daughter) asks to be picked up, or the patronising amusement as she prevents the baby from wandering off a cliff.  The supporting cast is similarly well appointed. I loved Sam Riley as Maleficent's soft-hearted "evil henchman" Diaval - and I'm sort there's fanfic being written about the two of them as we speak.  But how lovely to see Juno Temple as one of the three good fairies too.

So kudos to all involved - for Linda Woolverton's well-thought out script, to Peter Stromberg for his direction which is 9/10th amazing production design, to the charismatic Jolie and the believable relationship with Fanning's Aurora. If there's any false note it's perhaps Sharlto Copley's almost method-insane Scottish King Stefan, curiously grim and out of step with the almost self-consciously arch delivery of Angelina Jolie. He seemed to be in quite another film.

MALEFICENT has a running time of 97 minutes and is rated PG. MALEFICENT went on global release on May 28th. It will open in Japan on July 5th and in Bangladesh on August 6th.
Posted by Bina007 at 19:56