AZMAISH: A JOURNEY THROUGH THE SUBCONTINENT - BFI LFF 2017 Preview 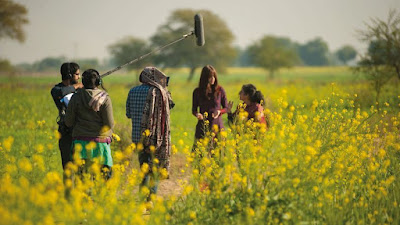 AZMAISH: A JOURNEY THROUGH THE SUBCONTINENT is a searing, provocative and deeply relevant documentary about the demise of liberal humanism in India and the rise of the Hindu-fascism.  It contrasts this with the parlous state of Pakistan - a failed state dominated by an uneasy balance of militarism and Islamism that didn't even have the luxury of decades of Nehru-ism that India at least benefited from.  Both countries now have a political discourse driven by discriminating against the Other, and are united in expressing this through the subjugation of women - an ironic commonality.  The brave documentary who chronicles this slide into extremism is Sabiha Sumar, a child of Partition who grew up in Pakistan with her father's memories of liberal India.  She takes her journey with Bollywood and arthouse actress Kalki Koechlin, as they move from articulate but petrifying dinner table conversations in Mumbai to feudal rural Pakistan. The over-riding conclusion is that India is wilfully throwing away its inheritance of liberal democracy in favour of Hindu populism, and they aren't afraid to point out that the ruling party has its own funded militant violent thugs, akin to the SS. And, as Kalki points out, if a new generation is raised in segregation, rather than in the diverse communities of the past, learning to hate from the cradle, "then we really are screwed".  By contrast, the  problems of Pakistan seem like a more acute version of the same - deep political corruption and an in-state terrorist organisation - the Taliban.   As I watched this brilliant and brave film, I kept thinking of all the parallels with the Europe and the USA today - not just the obvious populist vote for Trump - but the degradation of liberal discourse - as much from the Left as the Right.  A Hindu fascist argues in this documentary that critics of the new Indian government argue that the quality of discourse in parliament has gone down - but then that was only ever the discourse of the liberal elite and didn't reflect the concerns of the uneducated masses. We are seeing something of the same in the West today - the increased distrust of the learned expert, and the very institutions that underpin our democracy.  And in the segregation of communities into the vegetarian building or the Hindu building or the Muslim building aren't we seeing a reflection of the liberal Left's fight for "safe spaces" and the protests against dissenting speech on campus?  Apparently all diversity is good except diversity of thought.  In the closing moments of this film, the director also makes the link to the rise of populism in the West. And I wondered why there weren't more films addressing this in the LFF line-up and being thankful for this one. I've long since been petrified by the slide of India into extremism and finally we have a spotlight onto this vitally important issue.  That said, far be it for us to be complacent when we suffer from so many of the same problems. This is a must see movie.

AZMAISH: A JOURNEY THROUGH THE SUBCONTINENT has a running time of 85 minutes. The film played Toronto 2017.  Tickets are still available for one of the screenings at the BFI London Film Festival.
Posted by Bina007 at 07:05