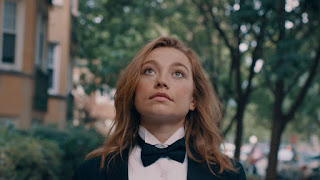 Stephen Cone's PRINCESS CYD is a slow paced and quietly beautiful love story on two levels. The protagonist is a 16 year old survivor of an unexplained childhood tragedy that killed her mother. Years later her struggling father sends Cyd to Chicago to stay with her aunt for a few weeks in her mother's old family home.  At first they have nothing in common.  The aunt, Miranda, is a famous author who lives by her intellect and is introspective. By contrast, Cyd is uninterested in books and mostly wants to sunbathe and flirt with a girl, Katie, from the local coffee shop.  Cyd's criticism of her aunt's lifetime result in a plea for tolerance, and soon time and slow adjustments do their work.  In the end, the movie becomes a love story between Cyd and Katie, but also between Cyd and her Aunt - who forge a strong familial tie as important as the fledgling love affair. All three women end up stronger and happier for their connection, and the young girls finally appreciate the power of the written word to transform lives, just as the aunt appreciates the joy of living in the moment.

The performances are good across the board and the rest of the production workmanlike.  But I have to say that I struggled with the film, especially in its first two thirds. It felt too slow, too dull, too obvious.  The movie went exactly where I thought it would and the epiphanies were as predicted. The weirdest part is that you never really feel that Cyd or her aunt are living in the aftermath of a family tragedy. And when the writer introduces a pretty shady and dangerous plot involving Katie, it also feels like it has no consequences. Overall, this movie has some worthwhile aspects to it, but is ultimately a pretty dull watch.

PRINCESS CYD is playing the BFI London Film Festival 2017.  There are tickets available for both screenings.  It will be released on the internet in the USA on December 5th.
Posted by Bina007 at 07:33