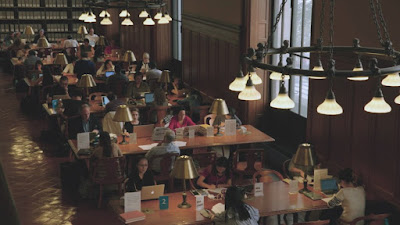 After the magisterial IN JACKSON HEIGHTS, documentarian Frederick Wiseman returns to New York for EX LIBRIS - THE NEW YORK PUBLIC LIBRARY. In over three hours, his quietly investigative camera shows us the myriad ways and places in which the famed institution works.  Yes, some of that is in the iconic Beaux Arts building and involves people checking out books and researchers inquiring after the Gutenberg Bible. But it also involves disseminating knowledge in the most broad sense possible - bringing attention to the pockets of people who don't have access to the internet, and making sure they have somewhere where they can get online too. It also involves people taking courses to upgrade their skills, or apply for civil service jobs, or citizenship.  Or learning by listening - to Richard Dawkins on secularism, to Elvis Costello on how a song's meaning can change with intonation or subversive musical echoes, or to an historian of slavery, or a poet protesting since Vietnam.  The quality of the discussion is superb, and the fact that this, and all the resources, are available to the public is mind-blowing and gratifying.  The work of the library also extends beyond its main campus to its smaller offshoot buildings, and to community outreach work. It's a poet talking to kids about Alice in Wonderland with a baby gurgling in the background.  It's in these sections that one really gets a sense of the vitality of the institution and a glimpse into life in New York beyond the glossy Manhattan cinema backdrops that we are so used to - of real people in an active and diverse community.

The length of the film may be offputting to some, but is typical of Wiseman's films and allows his room to let his subjects breathe and talk and for us to hear their mission and their concerns.  To watch it all the way through it to enter their world and truly catch a glimpse of something real and, yes, inspiring. Because in a world  where we are atomised by social media and handheld devices and societal segregation, there's something beautiful about a community space where people come together in the pursuit of knowledge, debate - where even the homeless are welcome - where you find kids and grandparents - English speakers, Spanish speakers and so many others - people searching for books, prints, poetry - in the best tradition of a liberal humanism that is now under threat.

EX LIBRIS - THE NEW YORK PUBLIC LIBRARY has a running time of 197 minutes.  The film played Venice and Toronto 2017. It is playing the BFI London Film Festival, where it is nominated for the Grierson Award. Both screenings are sold out but there are usually stand by tickets available on the day.
Posted by Bina007 at 06:13