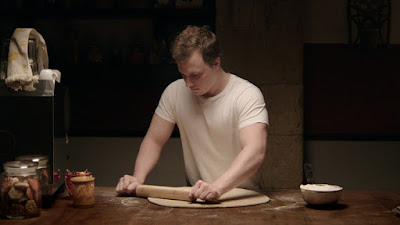 Ofir Raul Graizer's THE CAKEMAKER is an anaemic relationship drama that never recovers from Tim Kalkof's opaque central performance as the eponymous baker.  His character, Thomas, is in a loving relationship with a married Israeli man, Orun, who dies in a car crash.  This prompts our almost silent hero to go to Jerusalem and insinuate himself into the life of his ex-lover's widow Anat (Sarah Adler).  His baking is so good it draws crowds, but puts Anat's Kosher license at risk.  And soon she finds herself falling in love with him.

When the film works best it's in its ambiguities.  Does Thomas return her advances because he was always bisexual and is actually attracted to her, or is he gay but somehow wants to feel close to his ex-lover?  How much does Orun's mother know about his and Thomas' relationship? And just how will Anat and Thomas' relationship resolve itself.  I love that the writer-director doesn't feel the need to overburden us with clear-cut answers. But there's also a criticism to be made in this cool detachment. First, that the love affair between Orun and Thomas is shown in such a bland way - as if the director is embarrassed at showing a homosexual relationship on screen.  Second, that the protagonist remains so unknowable that one's left leaving the cinema frustrated at the lack of emotional entry point to his story.

This film reminded me a lot of Hong Khaou's LILTING.  That film starred Ben Whishaw as the grieving lover of a closeted man. Except this time, instead of befriending his ex-wife, he befriends his prejudiced mother. The contrast is striking - both films were sensitive and delicate, but Whishaw's exceptional performance took us right into the heart of grief.  This is what THE CAKEMAKER so clearly missed.

THE CAKEMAKER has a running time of 104 minutes. It played Berlin 2017. It is also playing the BFI London Film Festival 2017 where it's nominated for the Sutherland Award for First Feature.  There are tickets available for all three screenings.
Posted by Bina007 at 11:19