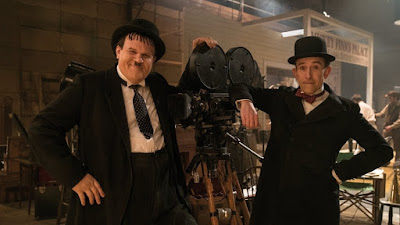 STAN & OLLIE is a rather limp attempt to depict the declining years of what was once the most famous comedy double-act in the world - Laurel and Hardy.

The movie opens with them at the height of their fame, but notoriously in a contract dispute with studio boss Hal Roach.  Laurel - the more financially astute of the pair - wants to leave Roach and take the risk of producing their own movies, and so make the phat cash that Chaplin is amassing.  But Hardy - a gambling addict who needs the steady income - is nervous. We then skip forward 15-odd years and the fashion for Vaudevillian slapstick has waned, and while Chaplin sits in tax exile in Switzerland, Laurel and Hardy are back in England, scratching out a tour in humiliating circumstances, trying to finance their final film. A slew of PR stunts has them reverse their commercial failure only to see old resentments and health concerns threaten to derail them again.

Writer Jeff Pope (PHILOMENA) very much wants to depict this emotional conflict as that of a marriage brought down by betrayal - the duo love each other but Hardy working with another comic was like an act of adultery and betrayal than broke Laurel's heart.  This theme is hammered on again and again in this film and is ultimately asked to carry too much weight. It's also not born out by the historical record.  When Laurel was ill he suggested Hardy work with others!


This film is also not helped by director Jon S Baird (FILTH) rather workmanlike visual and production style. There's no real energy or excitement here. And so the burden of entertainment falls on Steve Coogan and John C Reilly as the duo.  The visual resemblance is very good thanks to some subtle make-up and great acting from Coogan and some seamless prosthetics for Reilly.  But I'm afraid that no matter how good these actors are at comedy, the style of vaudevillian slapstick just doesn't translate to a modern audience.  It was truly painful watching them perform on screen - and the in-movie audience laugh - and the real audience in the cinema just not react.  Even worse, in the end-credits, we see clips of the real Laurel and Hardy perform the sketches we've just seen recreated - and the real duo are just better.

In fact, the most damning criticism of this film as comedy, is that the funniest moments  - the  most authentic double-act - is that of Laurel and Hardy's wives, Ida and Lucille.  Nina Arianda (FLORENCE FOSTER JENKINS) absolutely steals the movie as Laurel's feisty Russian wife Ida, and some of her banter with Hardy's wife (Shirley Henderson - always superb) is just fantastic.  But that's basically it for entertainment in this simplistic, lethargic biopic.