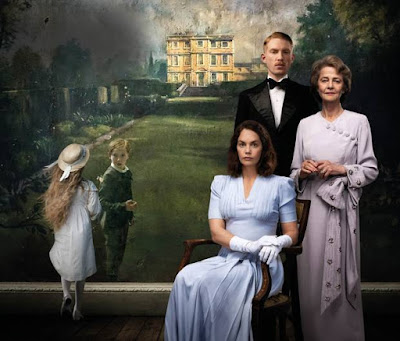 Lenny Abrahamson (ROOM) returns to our screens with another film based on a prize winning book - this time the slow-burn period haunted house story THE LITTLE STRANGER by Sarah Waters. The adaptation is faithful and so shares the books strengths and weaknesses.  Its strength is its evocation of post-war England in which the great estates are being bankrupted and social change is afoot. Our protagonist is a doctor (Domnhall Gleeson - Star Wars' Hux), soon to become part of the NHS. He still resents the fact that his mother worked herself to the bone in a grand country house, and while he ingratiates himself with the family carries a working class chip on his shoulder.  The grand family hard on its luck are made up of a still grand mother (Charlotte Rampling), a brutally war-injured son (Will Poulter - superb in a "posh" character role), and Ruth Wilson who as ever seems to be operating on a far higher emotional level than the other actors she's working with.  She's really the focus of our attention - a woman who is clever and capable but is stuck trying to keep the family together against financial ruin and now - apparently - spooky goings on.  I also love the theme that Sarah Waters often explores of how women, no matter how smart, are often under-estimated, unheard, or worse wilfully disbelieved simply because of their gender.

What I like about the film is its patient slow build, but I can see why this might frustrate fans of more pacy and punchy horror. After all, I am a notorious coward when it comes to watching horror so if I can get through the film you know it's not really that scary - more of an emotional exploration of the history that is haunting the family.

THE LITTLE STRANGER is rated R and has a running time of 111 minutes. It was released earlier this year.
Posted by Bina007 at 18:19