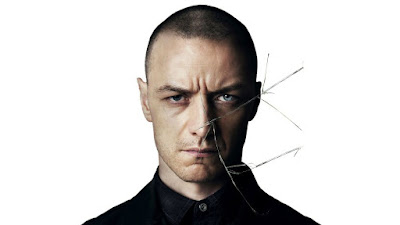 With the release of GLASS on January 18th 2019 I thought it was about time I got my arse in gear and watched M Night Shyamalan's super villain origins story, SPLIT - the successor to UNBREAKABLE and THE SIXTH SENSE and prequel to GLASS.  That GLASS is happening at all is thanks to the remarkable box office success of SPLIT - making just under $290m off a budget of only $9m - making it the most profitable film of the year.

I can happily report that SPLIT is a truly remarkable film beyond its financials - perhaps Shyamalan's best since UNBREAKABLE - and certainly featuring a career best performance from its lead actor James McAvoy. He plays a man suffering from the real-world-controversial psychological disease of Dissociative Identity Disorder.  He contains 23 personalities of which we see McAvoy portray a five or six, sometimes moving between them in the same scene. It's a truly bravura performance - encompassing not just different accents, but different ages, sexes, sexual orientations and personalities.  Shyamalan goes further than modern psychiatry - positing through his avatar of the psychologist (Betty Buckley - also superb) - that each different identity can manifest itself physically differently. And while McAvoy *is* physically transformed for one of his identities for the rest he merely relies on posture, confidence, presence to make himself appear larger, smaller, or more or less meaning.  For the life of me I cannot think why his performance was not nominated for awards other than the industry's prejudice against genre films in general, or Shyamalan in particular.

McAvoy apart this is just a very well acted film across the board from a cast of largely unknown actors.  It's also a film that is tightly plotted and does more with less. I was shocked at how low its rating was, but then again, it suggests rather than shows violence. It also has a commendably light touch with make-up and CGI.  Even in his final identity, McAvoy is still a visible, tangible person, rather than some Marvel-esque super-villian. I also loved how it takes the typical trope of teenage hot girls trapped by a killer but gives them agency and smarts, and does't ever show them gratuitously running around naked covered in blood. (ASSASSINATION NATION, I'm looking at you.)

TL-DR - this is one of the best films I've seen his year - admittedly belatedly - and now I cannot wait for GLASS.