STEEL COUNTRY AKA A DARK PLACE 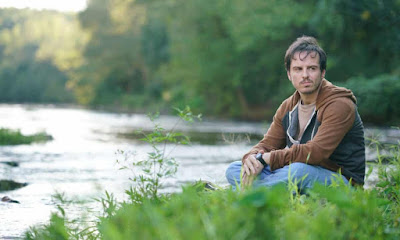 STEEL COUNTRY is a genuinely bad film, and all the worse for wasting the talent of lead actor Andrew Scott - the talent behind SHERLOCK's Moriarty and currently popular as the love interest in Phoebe Waller-Bridges' TV comedy FLEABAG.  A movie that should be a character-driven detective thriller becomes a boring, cliche-ridden murder without the mystery, pivoted on a performance hamstrung by a bad script and a strange choice of accent.

Scott plays a rubbish collector is a poor American town with a learning disability and thus a slurring accent. He becomes obsessed with the disappearance and then death of a local boy and starts to literally tootle through people's rubbish to get to the truth.  We're meant to sympathise with him and hate the locals who are so prejudiced against this odd man that they think he did it. But the problem is that the character IS genuinely sinister. Just look at the way he obsesses over his Baby Mama, constructing a weird fantasy around her, refusing to acknowledge that she doesn't want him. I'd be applying for a restraining order stat.

That said, the movie is beautifully shot by Marcel Zyskind, and builds towards a genuinely moving (if unsurprising) confrontation between our protagonist and the dead boy's mother.  Scott's genuine quality shines through here.  And we're about to move toward a rather emotionally satisfying conclusion until director  Simon Fellows (GOD THE FATHER) and debut screen-writer Brendan Higgins balls it up with an absurdly out of character, tonally jarring, and absurdly melodramatic ending.

STEEL COUNTRY AKA A DARK PLACE has a running time of 89 minutes. It was released last week in the USA and is now available in the UK, in cinemas, and on streaming services.
Posted by Bina007 at 11:10