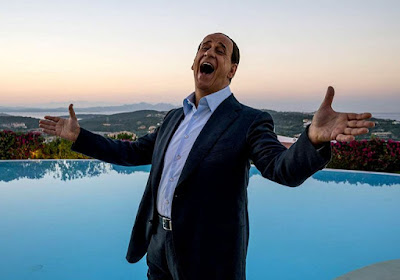 Paolo Sorrentino's latest film LORO (THEM) is a film about the obsequious corrupt parasites that tried to make money during the reign of the abominable Italian President Silvio Berlusconi.  Infamous for amassing a media empire, then using the presidency to protect himself from prosecution and taxes, Berlusconi was a glutton for money and sex.  Moreover, in many senses he was the precursor and pioneer for a new breed of businessman turned populist demagogue - with a line leading from him via Orban to Trump.  Accordingly, one might have expected an urgent and excoriating film treatment from Italy's premier arthouse film-maker, Paolo Sorrentino.  After all, Sorrentino has form!  His nonpareil take-down of Italian Prime Minister Andreotti, IL DIVO, is one of my all-time favourite films.  And his bizarre surreal TV series THE YOUNG POPE is a similar, if fantastical, take-down of the corruption in the Vatican and its links to contemporary Italian politics.

Imagine, then, my disappointment in finding LORO to be a rather toothless affair. Worse still, baggy, directionless, dare I say it? Dull!  Maybe this is a result of the format that I watched - a still over-long 150 minute compression of what were originally two separate feature films released in Italy last year.  But that still doesn't excuse this highly disjointed, weird final product.

The film opens with its focus on a sleazy low-level businessman who wants to move into the orbit of "him".  He pimps out pretty much every woman he knows, including his partner, for advancement.  He courts one of Berlusconi's mistresses. And makes a final expensive gamble - filling a villa with prostitutes and drugs and dance music - hoping to tempt Berlusconi to this apparently all-summer long bunga bunga party.  This section is really dull. It feels like a succession of beautifully shot living tableaux, set to moronic dance music. Endless shots of scantily clad women.  At some point you ask yourself when the depiction of sexual exploitation is itself exploitative - when the depiction of vacuous people is itself vacuous.

It's only about an hour into the film that we meet Silvo, as played by the always charismatic Toni Servillo. The disappointment is that Silvio is shown in an almost sympathetic light. He's out of office and out of the good graces of his wife - showing a vulnerability that's disarming.  As the audience, we delight in him flexing his con artist muscles, persuading a random Italian housewife to buy a non-existent flat that she can't afford. THIS is the movie I wanted. A movie that explained Berlusconi's brilliance and charm and ruthlessness. But it's just that one scene.  Finally his wife breaks away and in this desperation he finally falls for the bait in the villa next door. But after so much moral corruption on show, he hardly seems worse than the rest of them. And maybe that's Sorrentino's point?  We get the President we deserve, resemble, need to enable us?

LORO has a running time of 150 minutes. It is currently available to watch in cinemas and on streaming services in the UK and Ireland.
Posted by Bina007 at 11:02