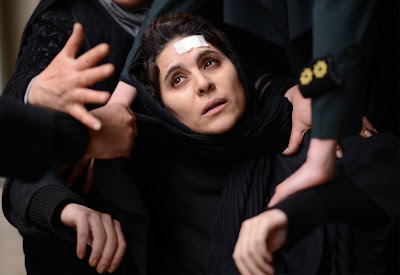 Farnoosh Samadi's contemporary Iranian tragedy is so unrelentingly dour that it slips into pastiche.  I was with it for around two thirds of its running time, but by the end the unrelenting and obvious nature of its plot twists was so extreme that Mr007 and I were, frankly, laughing. By the time you hear a child singing at the end, a moment which should provoke tears, we were howling with laughter.  This may well speak to our cynicism, or maybe just being in the wrong mood, but I also feel it speaks to a kind of unfolding doom that is so predictable and foreshadowed and heavy-handed that it just bludgeoned all natural feeling.
The film opens on a bad marriage.  The husband clearly loves his beloved daughter way more than his wife. That said, despite his daughter's evident joy at being able to sing at a family wedding in the north, he forbids his wife and daughter for travelling their without him, as he has to travel for work. When tragedy strikes, the shocked wife decides to cover up the location of the event so that her husband won't find out her deception, leading to endless lies, piling on lies, of such an easily discoverable tone that the ending is sadly inevitable. To add to the familial woe, the wife is also a teacher whose pupil has fallen pregnant by her boyfriend.  Yet another scenario in which the wife can be subject to ever more tragedy.
I agree with the reviewers who appreciate this film in that Sahar Dolatshahi gives a very powerful performance as the wife. I just didn't get into this film AT ALL.

180 DEGREE RULE has a running time of 83 minutes and played Toronto and London 2020. It does not yet have a commercial release date.