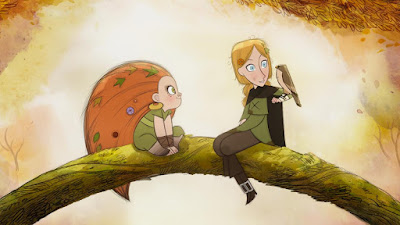 From the directorial team that brought us the delightful children's animated films SONG OF THE SEA and THE SECRET OF KELLS comes the visually stunning and warm-hearted WOLFWALKERS.
The film is about a friendship between two young brave girls across the lines the divide the seventeenth century Irish city of Kilkenny.  On one side we have Robyn, whose English father (Sean Bean) is part of Cromwell's occupying forces.  He's a lovely father, keen to protect his young daughter, but in a dynamic not dissimilar to that between Ned and Arya Stark, she just wants to have adventures in the woods. It's there that she meets Meabh, a young girl who lives with the wolves in the woods outside the city walls.  The occupying forces, led by Simon McBurney's leader, want to get rid of any of the pagan influence of nature, and to enforce strict Christian control. They are depicted in harsh angles and strong primary colours as they move through the densely packed, vertically imposing streets of the medieval city. By contrast, the woods are gloriously vividly warmly coloured and full of organic swirling shapes and movements.  The wolves aren't the evil nasty beings the townsfolk think they are.  They just act that way to try and scare off the people who are trying to run them off. In fact, the wonderful Wolf Mother, Maebh's mum, are healers who live in harmony with nature.
And so we set up this wonderful adventure story where Maebh and Robyn team up to try and rescue Maebh's mother.  On the way, Robyn realises that she too can be a wolf at night. I loved how the animators gave us a wolf-eye perspective, changing the style of animation to show us her stunning night-vision.  And the themes of the strength of female friendship - the importance of empathy and diversity and respecting the environment - resonate too.
WOLFWALKERS has a running time of 103 minutes and is rated PG. The movie played Toronto and London 2020 and will be released in the USA on December 11th.
Posted by Bina007 at 19:30