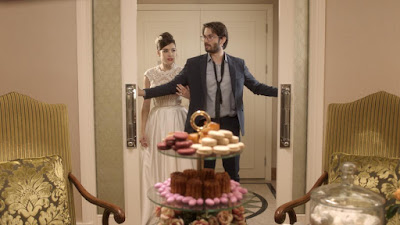 HONEYMOOD is an absolutely wonderful dramedy set in contemporary Israel.  On their wedding night, a young seemingly happy couple get locked out of their palatial honeymoon suite.  In searching for the room key the wife finds a note written to the husband from his ex as well as a ring.  This prompts the wife to drag him through the city to try to find the ex and return said ring.  What this uncovers is the fact that the relationship was clearly a rather quick one, on the rebound. That the husband's family actually really liked the ex, and much to his chagrin still have her photos plastered over their fridge door.  And that the wife, in a kind of semi-drunken state is really questioning what the frack she has done!

I loved the whimsical detours through the night - the mockery of their mutual friend - a film student - with his never-ending film that they have to sit through - or the amusement of the armed guards outside the Prime Minister's house at seeing yet another runaway bride - or the fact that the poor groom can't escape his overbearing parents even when he pops into a local cafe for a bit of peace and quiet and a falafel. I also love how the idea that a groom can give a Mitzvah - a bit of good fortune to others - leads to such absurdist prevarications on the part of the bride.

There's so much to love here - a lightness of touch even when dealing with some pretty profound emotional issues. And it all hangs on a pair of great performances, not least from Avigail Harari as the bride.

HONEYMOOD has a running time of 90 minutes. The film played Tribeca and London 2020 and was released in Israel earlier this year.