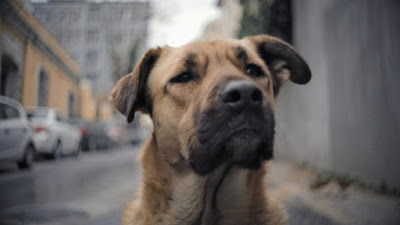 I am not a dog person and I really didn't connect with STRAY - an award-winning doc by Elizabeth Lo about stray dogs in Istanbul.  It focusses on three dogs and gives us a dog-eye-level view of life on the streets. The pleasure I had in the film were seeing those insights and I kind of wished the dogs were out of the way.  I know the film wants to tell me something deep and meaningful about how we treat homeless dogs vs homeless Syrian refugees but honestly I just want to focus on the latter.  There's so much political and religious and social conflict and crisis and nuance in Turkey today, I cannot believe this was the subject path the director took! Finally, we end up with a kind of dog's fantasy scene of strays gambolling in the countryside. It was all just too twee for words.

STRAY played Bergen and HotDocs 2020 where it won Best International Feature. It is currently playing at the BFI London Film Festival. It has a running time of 70 minutes.