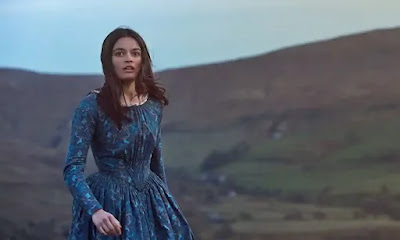 I sat down to MR MALCOLM'S LIST wanting to love it and left bitterly disappointed. I sat down to EMILY resenting its premise and yet loved it! Two costume dramas. Both directed by feature film debutantes.  So very different in style and ambition.

First the premise.  I hate when we have to explain genius. When we have to explain why Grammar school boy Will Shakespeare wrote so beautifully by arguing that he was actually an aristo.  When we have to explain why Emily Dickinson could write with such passion and fervour though barely leaving her virginal solitude.  The same goes for Emily Bronte. She in unknowable - her slight life barely explaining the enduring power of her savage, dark, brooding masterpiece Wuthering Heights.  And so it is tempting to modern minds to graft onto her slender biography a torrid sexual affair that speaks to her knowledge of love denied.  I hate this stuff.  But I also loved this film.

Emma Mackay plays Emily Bronte as a smart young woman full of energy and mischief and intellectual curiosity but hemmed in by Victorian provincial rectitude - not to mention the symbolism of confined corseted clothing. She loves her family but is perhaps envious of her brother being able to try his talent as an artist and writer, and angry at his dissipating himself on drink and drugs. The film posits a sexual awakening with the new curate (Oliver Jackson Cohen), who respects her intellect, encourages her to write, but is unwilling to throw off convention in continuing their love affair.

The film is written and directed by Frances O'Connor, an actress who costume drama fans will remember for her spirited Fanny Price, quite unlike anything in Jane Austen's actual Mansfield Park. Here, she reimagines Emily Bronte as a proto-feminist proto-modern writer in a manner that feels entirely plausible and authentic. She is helped in realising her vision by Nanu Segal's stunning landscape cinematography and most particularly by Abel Korzeniowski tremendously inventive, all-enveloping, stunning score. But mostly this is about Emma Mackay, showing once again her talent and ability to bring sensitivity, intelligence and spirit to any role she touches.

I hope to see more from both O'Connor as director and Mackay as actor. You'll know why when you get to a tour de force central scene at a seance where both Mackay and O'Connor conjure up a feeling of such intense grief and compassion and such spectral fright as to show two women really harnessing all their artistic power. This is film-making to seek out and applaud.

EMILY is rated R and has a running time of 130 minutes. It is available to rent and own.