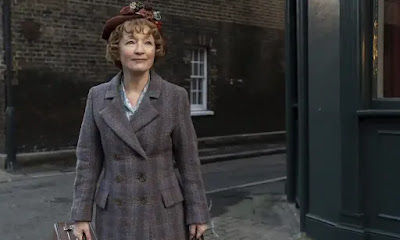 MRS HARRIS GOES TO PARIS is a three-star film turned into a four-star film by the both delightful and moving central performance from Lesley Manville, as well as some sharper than expected writing.  I came to the film for whimsy and froth but thanks to Manville we get something deeper and more acute in its diagnosis of post-war class snobbery.
Manville plays a post-war cockney cleaning lady who is taken for granted and grifted on by her rich employers (Anna Chancellor - magisterially awful).  Good and ill fortune (not least her war widows pension) give Mrs Harris the money to go to Paris and buy a couture dress from Christian Dior - her heart's desire. She has to contend with the snobbery of the Dior saleswoman - an equally haughty Isabelle Huppert, but soon wins over the ladies of the sewing room, the models, and the accountant (EMILY IN PARIS' Lucas Bravo) with her good humour, good heart and ready cash.
Naturally, she gets her dress, and is the agent of romance, and all against a soft sunlit Paris that is creamy-delicious to look at.  But there's always the dark backing of reality and Mrs Harris is no fool. She knows when she's being condescended to, and to see her face crumple when a certain character pigeonholes her as a servant is to have your heart break.  The genius of Mrs Harris is that, amid the whirlwind, she never loses herself. She is proud of what and who she is, despite society's attempts to make her feel less than. And I've never felt a delightful ending more earned and joyous.

MRS HARRIS GOES TO PARIS has a running time of 115 minutes and is rated PG. It is available to rent and own.