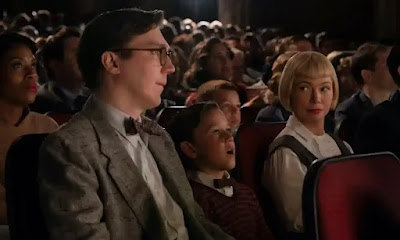 Hollywood  loves a movie about movies so THE FABELMANS will probably win a ton of Oscars. Michelle Williams gives one of those Oscar-bait performances that's big and tortured and involves her crying for at least fifty percent of the movie in a performance that felt really mannered and fake to me.  This kind of torpedoes the whole film for me, and even without that it's just dull. It's actually worse than AMSTERDAM, which I watched on the same day, because while AMSTERDAM was incoherent, it at least contained flashes of brilliance. By contrast THE FABELMANS is far better made. It's coherent, it's well acted, it looks great, it's just a polished grown-up film. But it's so dull and predictable and blah.  It's just the same old story Spielberg always tells - about the loss of childhood innocence and the trauma of divorce - usually featuring a station wagon and a cute kid sister -  except this time in the guise of a biopic rather than an adventure film.

The movie focusses on the marriage of Burt (Paul Dano) and Mitzi (Williams). He's a really decent guy, with increasing corporate success. But she's a frustrated concert pianist who spends the entire film battling depression and in love with Burt's best friend Bernie (Seth Rogen).  Her unhappiness dominates the family dynamic and puts unrealistic pressure on their son Sammy (Gabriel Labelle) to pursue his dreams of film-making: he is told by both his grand-uncle and Bernie that if he doesn't pursue his art he will break his and his mother's heart.

So the other half of the movie is seeing Spielberg, sorry Sammy, come of age in a school rife with anti-semitism, and make his first tentative steps into the film industry. Contrast the straightforward, polished, frictionless, lifeless way in which prejudice is treated here versus the grungy, nasty, altogether more impactful way in which it is depicted in AMSTERDAM.  At one point in a high school scene I felt the jocks were about to break out into a song and dance number, a la WEST SIDE STORY.

This is the problem with Spielberg. Even when telling the story of his own life he can't avoid smoothing over all of the spiky edges and making something soupy and syrupy and glossy.

THE FABELMANS is rated PG-13 and has a running time of 151 minutes.