THE WOMAN KING is a curiously old-fashioned and satisfying action epic that brings to an untold (at least in the west) story of the Dahomey empire the same kind of sword and sandal grand sweep of films like GLADIATOR.  Director Gina 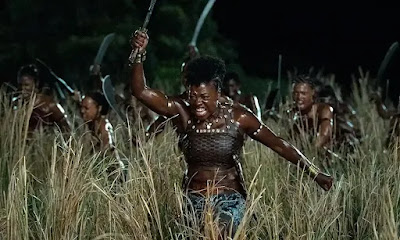 Prince Bythewood (THE SECRET LIFE OF BEES) proves to be an impressive helmer of large-scale battle sequences. Cinematographer Polly Morgan conjures up majestic landscapes and the visceral heat of the red-earthed soil.  And Terrence Blanchard gives us a score that both has orchestral majesty and the bone-stirring war-cries of native songs.  This is a film to stir us and impress us.  Just look at Viola Davis' newly jacked physique. She and her female warriors look every inch the part.  But this film also gives us real emotion and doesn't shy away from the terror of war, far beyond the typical machismo of male-led films.  When Davis' General Nansica relates how she was the victim of rape, we are with her in her trauma.  When her deputy Izogie (Lashana Lynch) and her newly trained warrior Nawe (Thuso Mbedu) are captured, we feel their peril.  Maybe this isn't such old-fashioned film-making after all.

The only thing that lets this film down is its rather wooden dialogue from screenwriters Dana Stevens and Maria Bello, and a rather thinly drawn set of antagonists in John Boyega's King and his wife. What the film posits is a callow king who is torn between taking the riches of slavery (his wife's advice) and standing up to the neighbouring Oyo tribe and diverting his own economy toward palm oil production (Nansica's advice).  Sadly the King does little but look aggrieved and his wife is a caricature rich spoiled woman.  The film could've done more to show her motivations, given that her position is actually the one that the Dahomey empire took.

THE WOMAN KING is rated PG-13 and has a running time of 135 minutes.