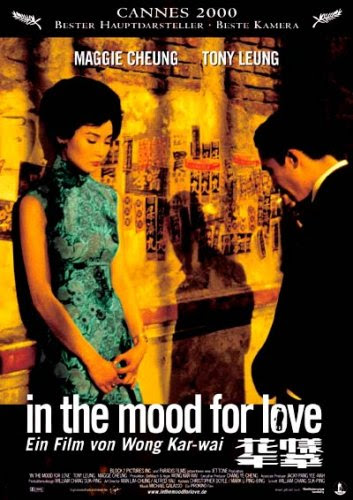 IN THE MOOD FOR LOVE is one of the most beautiful and touching movies of recent years. It is quite simply a story of unconsummated love between a man, Chow, and a woman, Li-zhen, who decide to rise above the pettiness of the world that surrounds them. They first meet in the cramped apartment building that they share - surrounded by nosy neighbours and the noise and fast pace of Hong Kong in the 1960s. Tony Leung plays Chow as a weary, hard-bitten newspaper man. The emotional range he conveys and the empathy he evokes in the audience won him the Best Actor prize at Cannes in 2000. Though a married man, he becomes transfixed by his glamourous new neighbour. They spend time together and the sexual tension is evident. The discovery that his wife and her husband are having an affair changes everything. At once, the tension is heightened as they play-act the roles of their spouses - indulging in dialogue they would so dearly love to be for real. And yet, they cannot now consummate their relationship because that would be as cheap as the world that surrounds them.

The story is reminiscent of BRIEF ENCOUNTER, but the resulting film couldn't be more different. The movie feels like a lament to a lost age. Wong Kar Wai delights in the fashion, interior decor and music of the 1960s. The movie is quite self-consciously retro, whereas BRIEF ENCOUNTER is delightful because it is so definitely of its time. The feeling of self-indulgence in IN THE MOOD FOR LOVE is heightened by the fact that Wong Kar Wai seems content to meander through his sets and linger in places he has no business being. So, Christopher Doyle's camera will gently move through corridors, into bedrooms and cramped kitchenettes. Sometimes, the action will be off screen or reflected in mirrors. The whole movie seems to live in a world where colours are brighter, movement is slower and emotions are inescapable. And that's what transforms a basically simple story into an unforgettable tragedy, making IN THE MOOD FOR LOVE a true pantheon movie.

IN THE MOOD FOR LOVE was released in 2000 and won Best Actor and the Technical Prize at Cannes. It is widely available on DVD, but if you ever have the chance to see it on the big screen you should definitely avail yourself of the opportunity.
Posted by Bina007 at 10:34