SALT - Ain't nothing wrong with thrills and spills 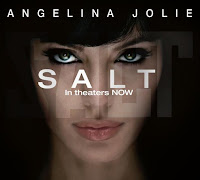 An  ex-KGB goon walks into a CIA building in DC and outs an alleged Soviet mole, who is planning to assassinate the Russian President in New York in 24 hours time. For the rest of the movie, that mole has to rush to New York; infiltrate the Russian renegades who are trying to trigger a nuclear war; protect the US president; and all the while avoid the clutches of CIA Counter-Intell. Is this a job for Kiefer Sutherland in 24? Or Tom Cruise in Mission Impossible? Nope, in a nice piece of counter-programming, it's a job for Angelina Jolie, as Eveline Salt.
I had a lot of fun watching SALT. It's not a particularly clever film, and certainly not memorable, but for two hours it held my attention with great action set-pieces and better than typical acting for a genre movie. Note, for example, a scene in which Salt is on a boat, surrounded by KGB goons who have apparently done something she should feel upset about. Jolie has to play woman who is deeply upset, but pretending not to be - all the while giving the audience enough ambiguity that they wander who's side she's really on. Added to that, you get a supporting cast of the calibre of Liev Schreiber as her CIA boss, and Chiwetel Ejiofor as the Counter-Intell chief. So, all in all, two enthusiastic thumbs up. Not every movie needs to be Bergman. And while we're waiting for MGM to restructure its debt and push put another Bond flick, this will do very nicely.
Additional tags: Stuart Baird, John Gilroy, Daniel Olbrychski, Daniel Pearce, Hunt Block, Andre Braugher, Olex Krupa
SALT is on global release.
Posted by Bina007 at 19:21