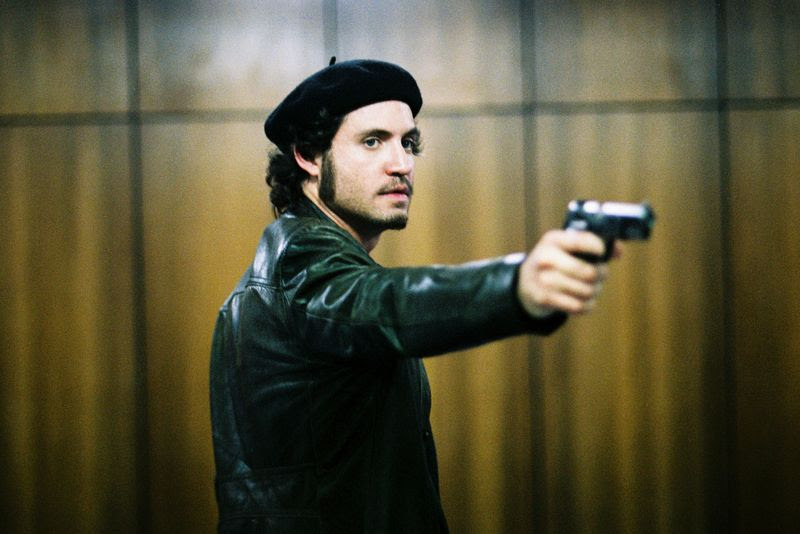 CARLOS is a sprawling, intense five hour cine-spectacular biography of the cack-handed, vainglorious terrorist Ilich Ramirez Sanchez aka Carlos aka Carlos The Jackal. Written and directed by Olivier Assayas and originally broadcast as a three part mini-series on French TV, the film was shown in its original length, back to back at this year's London film fest.It is also being released in some countries as a three hour edited down movie. It features a charismatic central performance from Edgar Ramirez who, as Carlos, isn't just IN every frame, but dominates the film.
As the opens we see Carlos as a good-looking, womanising, politically motivated young man living in Paris, hiding weapons in the bedrooms of compliant girls. He moves into the big leagues when he persuades a Lebanese terrorist organisation (the PFLP) to bypass his immediate superior and make him their point-man. Flush with pride and power, he organises a raid on OPEC headquarters in Vienna. The first part of the film ends with the terrorists and their hostages on a plane desperately trying to find an Arab country that will give them permission to land. Carlos thought they would be feted as heroes, but turns out no-one wants to alienate the international community. He is embarrassed and angry, but shows his true colours - when the ultimate sacrifice is called for - he wants life, fame, girls, money - rather than a martyr's death. And so the pattern is set. He isn't a revolutionary. He's a bank robber - self-interested, petty, vain, eager for cash and respect. He hides out in Hungary, festering, brooding, drinking, fucking. He hides out in Sudan. He causes a few more ructions but never really pulls anything off. Basically, he's just a massive pain in the ass. And then, when the Berlin Wall came down, he was a flabby irrelevance, of interest only to Interpol and the vengeful French prison system.
The ironic truth of Carlos' life is established: as a terrorist he's both a failure and a success. In pure terms, he causes little damage - his missions are failures. But in terms of causing terror with his notoriety - he is a roaring success. And this is irony is perfectly portrayed by Edgar Ramirez - in one of the stand out performances of the year - he is everything Carlos is - charismatic, pitiable - good-looking, a physical mess - radical, bourgeois. It's a multi-faceted performance, enabled by the long run-time of the movie - a long run-time, by the way, that simply skips by. The movie is also beautifully directed by Assayas, and while it was financed by TV it really does look tremendous on the big screen. One can only assume that cinematographer Denis Lenoir (PARIS JE T'AIME, RIGHTEOUS KILL) shot the action sequences and that Yorick le Sau shot (I AM LOVE, JULIA) the beautiful vistas of Lebanon. At any rate, however, they sliced up the credits, the film looks beautiful.
There is a rule that states that if a movie is shown on TV anywhere before it's released at the cinema, it can't be eligible for the Oscars. This is a desperate shame because CARLOS would certainly be in the mix for Best Director and Best Actor. It's definitely worth checking out, and ideally in the long form.
CARLOS was shown on French TV in May 2010 and played Vancouver, Cannes and London 2010. It will be released in the UK as two feature films. It is also airing on the Sundance channel as a 3 part mini-series.
Posted by Bina007 at 23:56