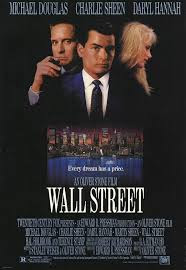 Oliver Stone is left of centre in his personal politics. How ironic, then, that his iconic 1980s morality tale, WALL STREET, single-handedly persuaded the teenagers of my generation that, rather than being teachers, doctors or engineers, what we really wanted to be when we grew up was Liquid. “Rich enough to have your own jet. Rich enough not to waste time. Fifty, a hundred million dollars, Buddy. A player. Or nothing.” Sure, the movie was an alleged morality tale and social critique. It took a naïve kid called Bud Foxx who traded insider information and his loyalty to his father’s little airline for a ticket to the big time. Naturally, he then got skull-fucked by his supposed mentor, Gordon Gekko. Foxx ended up in jail, and so did Gordon. But before we got to that point we saw a young kid living in a flash Manhattan apartment, date a hot blonde chick, eat at the best restaurants, and bask in the glory of the most charismatic man alive, Gordon Gekko. We wanted what Bud wanted, and so what if Gordon was a bit too sharp? – when he spoke about taking sleepy companies and making them profitable, it made sense! This man was dangerous PRECISELY because he was right. Greed was good. Greed was going to turn around over-unionised, over-bureaucratised corporations and increase profits. And don’t think Oliver Stone didn’t know what he was doing. As much as he gives Hugo Chavez a more than fair hearing in his latest documentary, half of what Stone’s doing isn’t applauding Chavez' Marxist policies but being dazzled by Chavez' power. WALL STREET is a film about power – and what makes it a great film – is that it shows how power is both repellant and fascinating. This is the ultimate human tragedy.
WALL STREET was both genius by design and favoured by good fortune. The good design lay in three things: a great script; great direction; and a great leading performance. To start with Stanley Weiser’s script, it’s about as near to perfect as you can get. You start with something rock-solid but not unusual: starry eyed boy tempted by fortune, sells his soul, loses everything, but finds himself. But then you add something truly original – you put that archetypal story in a world that few ordinary people have experienced – Wall Street – but which they were bound to be fascinated by, given its power and glitz. Finally, you express this story in a series of eminently quotable one-liners - “Lunch is for wimps” - “Money itself isn't lost or made, it's simply transferred from one perception to another” - “If you need a friend, get a dog.”
And then you anchor the whole package in a speech so logical, so persuasive and so dangerous, that today most bankers of my generation can still quote it in full:
“The richest one percent of this country owns half our country's wealth, five trillion dollars. One third of that comes from hard work, two thirds comes from inheritance, interest on interest accumulating to widows and idiot sons and what I do, stock and real estate speculation. It's bullshit. You got ninety percent of the American public out there with little or no net worth. I create nothing. I own. We make the rules, pal. The news, war, peace, famine, upheaval, the price per paper clip. We pick that rabbit out of the hat while everybody sits out there wondering how the hell we did it. Now you're not naive enough to think we're living in a democracy, are you buddy? It's the free market. And you're a part of it. You've got that killer instinct. Stick around pal, I've still got a lot to teach you.”
If we look at the direction and the leading performance, that iconic speech is a great place to start. Michael Douglas, with his good looks, slicked back hair, designer suits, and charisma, was everything Gordon Gekko should be. He was the guy whose self-belief was so over-powering you wanted to be in his world.    And look at how Oliver Stone films that great speech. It’s basically a still camera, with no cut-aways. In other words, Stone has the good sense to let the man take centre frame and hold our attention with his words.
True success requires not just talent but luck, and Wall Street had the luck of being released at a time when a lot of people realized that something was afoot, but hadn’t yet seen it articulated. We knew that bankers were becoming more aggressive and that ordinary people were getting caught up in an equity boom – we knew that Reagan and Thatcher had somehow changed the rules of the game – that we could want to make money without being embarrassed about it – but no-one had come out and just plain said it. Gordon Gekko took what everyone was feeling, took it to its logical conclusion, and brought it out into the open. He scared us with his candour – but there was also a crucial recognition and identification. WALL STREET didn’t just echo the zeitgeist, it told us what it was and reinforced its importance. So much so, that when we look back at that era, it’s Gordon Gekko, with his DynaTac phone, who still best articulates the mood of the time.
WALL STREET was released in 1987. Michael Douglas won the Best Actor Oscar beating William Hurt for Broadcast News; Robin Williams for Good Morning, Vietnam; Jack Nicholson for Ironweed; and Marcello MAstroianni for Dark Eyes.
Posted by Bina007 at 20:52